These vehicles will make the greatest gains in 2023 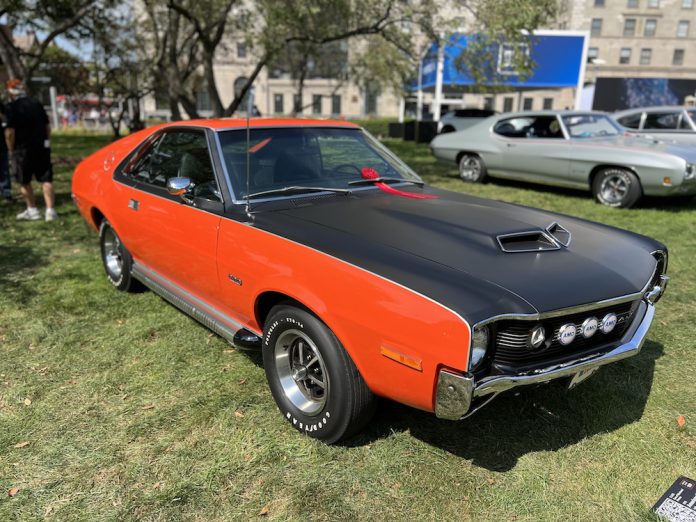 Hagerty, the automotive lifestyle brand seeking to be more than just your classic car insurance company, has just released its list of “bull market” collectibles for 2023 or, for you averse to Wall Street terminology, “an annual collection of enthusiast cars and vehicles with the best potential to hold or increase in value in the coming year.” What cars can be found within, according to the best valuation data and market insights analyzed by Hagerty’s team of experts?

“This year’s Bull Market list includes a diverse range of vehicles, including microcars, muscle cars, sports cars, exotics, a motorcycle, and even a military-grade SUV. The common factor is timing — even against the current economic backdrop, we believe this group is poised to grow the most in value next year,” says Vice President of Automotive Intelligence, Brian Rabold. “Buying a fun car while it’s on the way up means you can use and enjoy it while likely coming out ahead when it’s time to sell.”

After going through the list, I can only arrive at several conclusions:

Five of the 11 cars listed crest past the $100,000 mark in excellent condition. The average enthusiasts cannot afford a collectible with this market value. Does that mean the cars that may have the greatest appreciation potential over the next year, as predicted by Hagerty, are only available to the select few?

DR sez: Who would have guessed this “Z33” would appear on the list? They’re just used cars to me, and they don’t seem as interesting as the earlier “Z32” 300ZX that were all over the streets in the 1990s. Plus, how much are the new ones? Wouldn’t you just rather have one of the new ones? Alas, my subjective opinion may not be with merit among the other enthusiasts out there, so I’m left scratching my head while the drifters snap these up.

DR sez: When I was a kid, the 9000 Turbo was a killer sedan, achieving acceleration numbers not often seen in an era yearning for something fast. However, the 900 is the one that was available with two doors (including a convertible), which adds to its collector appeal. It wasn’t so long ago that Saab once existed in our world, so it’s nice to see the creeping enthusiasm, but up to $25,800 these days and possibly with room to grow? Seems like the world has passed me and I’m officially gray in the temples. What about you?

1991–1998 Suzuki Cappuccino ($12,200–$16,700)
Hagerty: The 63-horsepower Cappuccino won’t win any stoplight battles, but in the turns it’s a Miata on a diet and sure to surprise more than a few folks in your rearview. Millennial and Gen Z enthusiasts submit over 80% of insurance quotes, which assures there will be a dedicated following for the Cappuccino in the future. It’s nearly impossible to find a more interesting car for under $10,000.

DR sez: JDMs (Japanese Domestic Market to the uninitiated) will always have continued appeal, in my humble opinion, not only due to the demographical and psychographical shifts our hobby has experienced but also because there are plenty of interesting cars that never reached our shores. Many JDMs that have been imported in recent years have been Nissan Skylines and cute, retro-styled subcompacts like the Nissan Figaro, with this li’l Suzuki being part of the latter group. A funky kei-class sports car, the diminutive Suzuki is an interesting and fine choice, but how many are in the U.S. currently? And how many will now be coming to our shores?

2001–2004 Chevrolet Corvette Z06 ($31,400–$39,300)
Hagerty: A supercar in disguise, the C5 Z06 is a trackday monster that is also easy to live with on a daily basis. Lookups for the C5 Z06 on Hagerty Valuation Tools have more than tripled since 2021 – a strong indicator of an impending climb. In addition, an equal share of insurance quotes come from boomers, Gen X, and millennials, showing that demand is spread evenly throughout the market.

DR sez: The Z06 is no secret among enthusiasts, though Corvettes of this vintage are usually mentioned for their fine performance/affordability ratio. However, when it comes to the Z06, I simply can’t get past the goofy coupe body style and would rather have a newer Vette for the same kind of money … um, are they the same kind of money?

1984–1988 Toyota Pickup 4×4 ($20,700–$26,700)
Hagerty: If you’re into vintage 4x4s but have been priced out of Land Cruisers and Broncos, consider Toyota’s robust, handsome second-generation pickup. The number of Toyota Pickups added to Hagerty policies has quadrupled since 2017, with younger collectors as the fastest-growing segment. Although boomers currently own 43% of them, collectors under 40 more than doubled their ownership share since 2019, from 7% to 16%, ensuring a healthy appreciation for the model in the future.

DR sez: I’ve known these were popular because my Ford friend Everett loves to find one, fix what needs fixing and flip it. An utterly reliable vehicle loved the world over, combined with 1980s graphics on some of them, sounds like a winner to me, though I bet if you hesitate right now the ship will have sailed for these vehicles.

DR sez: Everyone loves the AMX no matter what allegiance, though few step up to the plate to actually buy one beyond AMC fans and well-heeled collectors who already have every other muscle car. As such, it’s only natural for AMX values to get dragged up in value by other pony cars but, considering what Hagerty says above about Camaros, it seems that one of the more popular pony cars (with rear seats, no less) may be a better investment? Yet the cost of entry for an AMX is closer to the pocketbooks of middle America, so make mine a 1970 with the “Shadow Mask” and four-speed 390 “Go” Package in Big Bad Green with corduroy interior.

1992–2006 AM General Hummer H1 ($105,000–$127,300)
Hagerty: There’s something undeniably appealing about a utilitarian, no-frills off-roader, and they don’t get more rugged and ready for action than the Hummer H1. Gen Xers (the biggest fans of collectible SUVs) own over half of all H1s protected by Hagerty, but millennial quotes are up to almost a third, which has doubled since 2020. Meanwhile, appreciation since 2019 has lagged, with an increase of only 9.9%. It seems the H1 may be overdue for a price increase.

DR sez: The ultimate urban assault vehicle. Never seen many on the road, and perhaps I am guilty of gossipy fantasies of what kind of person would buy one new, but they have their place in the automotive world and I am happy to roll out the red carpet for them. They were always quite pricey, and I think the current market value is what they cost new towards the end of production in 2006. I hear Duramax transplants are popular, but is the investment worth it when the apocalypse is near?

2008–2015 Audi R8 (Manual) ($154,000–$186,700)
Hagerty: The R8 has always been a special car, and a huge part of that appeal lies in the examples that came equipped with a manual transmission sprouting from a metal gate—a nod to classic Ferraris and Lamborghinis that came before. Insurance policy growth is more than three times faster than the Hagerty average over the past 5 years. Lookups on Hagerty Valuation Tools have doubled in the past 12 months, and they lead lookups for the similar Lamborghini Gallardo. R8 values are up 37% since 2019 with plenty of room to continue climbing.

DR sez: Dirty little secret: I had a thing for Audis when the company introduced the new-gen A4 over 20 years ago. Tidy styling, perfect interiors, and the gumption to put Mercedes and BMW on notice were attractive propositions, but Audi has gotten soft these days … alright, 2008-15 is not “these days,” but I never had the impression the R8 was the type of driver’s car that, say, an NSX was. In fact, Audi’s Heinz Hollerweger claimed in 2015 that “you have to look at lap times,” with the surprising revelation that the take rate for manual-transmission R8s in Europe was almost nil, so maybe there is some truth to my perception? Delving into the Audisphere, it seems sticks are about a third of production for the duration in which they were available. With sticks dying in the new car market, does that suggest sticks will be a special focus for late-model collectibles?

1936–1947 Harley-Davidson Knucklehead ($90,300–$115,000)
Hagerty: Throw a leg over this low and long cruiser and you’ll have some idea what freedom and rebellion meant in postwar America. Knucklehead owners are nearly three times more likely than Indian Chief owners to be under 45 years old. And those younger enthusiasts are insuring Knuckleheads for 15% more than boomers. As far as motorcycles go, the Knucklehead has a bright future with the next generation taking up the torch.

DR sez: Man, I knew old Harleys went for a lot of money, but six figures and climbing? All of a sudden, a used Ducati is looking like a bargain.

2001–2010 Lamborghini Murciélago ($302,700–$342,700)
Hagerty: It’s hard to argue against a 632-horsepower V-12 barking to 8,500 rpm just over your shoulder. If that’s your thing, grab one of these wild Lambos now. Values for the Murciélago are up 48% since 2019 but have lagged behind cars like the Porsche Carrera GT, which doubled in value over the same period. As next-generation enthusiasts are a growing share of owners (approaching 2/3), values for the Murciélago appear poised for more appreciation.

DR sez: If you’re one of those people who believe it “takes money to make money,” look no further than this Lamborghini, which cost as much as a house when new, still costs as much as a house used, and will appreciate more than your house in our new world of high interest rates. So, how many square feet is a Murciélago?

2004–2010 Mercedes-Benz SLR McLaren ($329,300–$380,700)
Hagerty: If ever there was an underappreciated hypercar, the SLR McLaren is it. While values for the Porsche Carrera GT have more than doubled since 2019, the SLR has increased a modest 37%. The SLR has long held a large premium over its spiritual successor, the SLS, but the value gap narrowed to only 7.4% in July 2022. In the third quarter of 2022, the SLR premium widened again, to 23%, with younger buyers fueling much of the demand.

DR sez: Hypercar? Arguable, but the underslung SLR McLaren featured a joint development from two legendary companies plus inspiration from the hallowed Mercedes 300 SLR of the 1950s. Like the Lambo above, it seems that the level of depreciation for these cars never hit a point for mortals to be able to afford, and now it seems to be getting away from us some more. Once I turn my garage into a more appropriate man cave, let’s check the price and see if it’s affordable for a grunt like me.