What happens when you hot-rod a hot rod 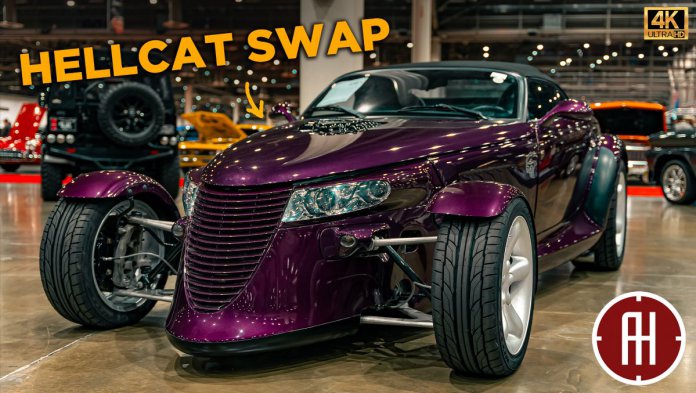 Remember the Chevrolet SSR? It was a stereotypical General Motors product of the era: half-cooked awesomeness that was killed when GM finally got it right. The 1997-2002 Plymouth Prowler was somewhat Chrysler’s version of that, but it’s an almost apples and oranges comparison since the Prowler never fulfilled its hot-rodder pretensions thanks to the 3.5-liter V6.

So how do you hot-rod a car inspired by hot rods? Allow me to introduce Exhibit A right here, a 1999 Prowler that has received a Hellcat transplant courtesy of a supercharged, 707-horsepower 6.2-liter Hemi V8. Of course, the original transmission could not handle the Hellcat’s power, so (horror of horrors!)  a GM TH400 three-speed automatic was utilized. To transmit all that horsepower to the Strange Engineering differential and Currie 9-inch rear, a custom driveshaft was constructed. You can imagine what kind of hijinks you can have with this retro-futuristic hot rod since a stock Prowler was originally 2800 pounds.

Thanks to the physical dimensions of the Hemi, a nicely centered hole was expertly cut on the hood for the engine. The federally mandated front bumperettes also have been removed, giving this Prowler a cleaner look. And, if you look closely, you’ll notice the cooling vents on the front fenders — they’re actually copped from the hood of a Dodge Viper.

Join AutoHunter Cinema’s very own Jalopy Jeff as he spends a few minutes going over this special Prowler and its fantastic upgrades.