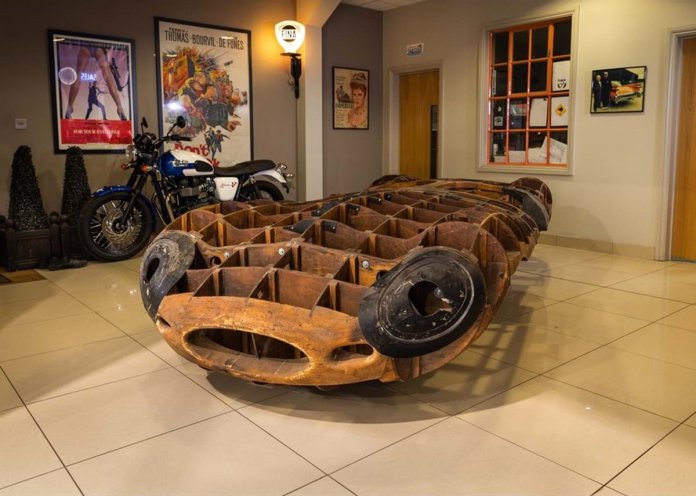 Anglophiles are gonna hate me, but Jaguar has been in a slump for decades. Since the 1968 XJ series, there hasn’t been a Jag that has made my ears perk up. The XJ’s successor in the 1980s simply was no match for the German (and Japanese) onslaught, and the XJ-S simply was a poor successor to the E-Type. The magic that made Jaguar such a desirable car brand around the world has been missing longer than the original XJ was produced.

So, what lights up Jaguar fans’ eyes? A D-Type is a good start. Produced in the mid-1950s, it was Jaguar’s race car to win at 24 Hours of Le Mans, and to that it did. The D-Type and its road-going XKSS variant are worth more money than what you and I are likely to earn in our lifetimes, but if you’re a skilled craftsman or woman, we have just the thing you need to afford one: a D-Type body buck.

Glance at this buck and you can easily make out the shape of the car. Jaguar craftsmen would bend aluminum on this buck to form the body, but there’s more to the story than that: it seems a company called Lynx Engineering used the buck to create 53 D-Type and nine XKSS in the early 1970s. They were somewhat legitimate as the company had a relationship with Jaguar, though the auction page explains that Jensen Special Products had a hand in building the vehicles.

Of course, once you have this buck, you would need to pull together several other resources to develop a legitimate home-grown D-Type, but it can be done. Up to the challenge? The auction was on November 26th, several days ago, but the buck did not sell. Life doesn’t often present many second chances, right?