A great example of a restoration done right 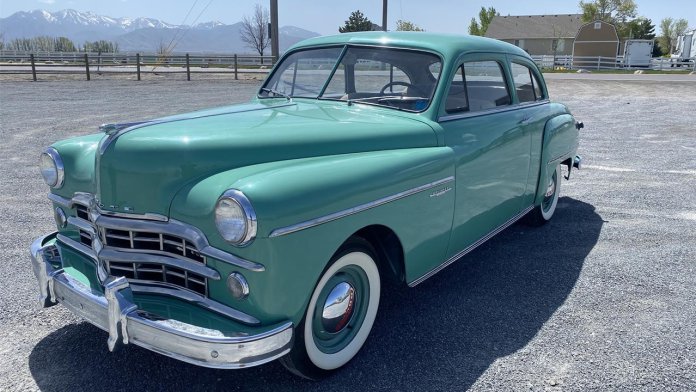 A detail-oriented restoration can sometimes take years to complete, and most seasoned classic car experts would probably agree: Taking your time is much better than cutting corners.

The Pick of the Day is a 1949 Dodge Wayfarer listed for sale on ClassicCars.com by a private seller in Grantsville, Utah.

The seller has provided a Google Drive link with many photos that were taken before and during the restoration process. From the gallery, we can glean that the car was garage-kept long-term with Wyoming license plates that expired in 1980. Its original green paint was redone in a similar color with a metallic flake, and the car received a period-correct set of wide whitewall tires to complement the look. The seller states that the frame and suspension were treated for rust prevention while the car was under construction. The cloth upholstery on the bench seats is reportedly original.

The Wayfarer, also known as the D-29 Series, debuted in 1949 as part of the Dodge model lineup in three different two-door variants: sedan, business coupe, and roadster. The latter was offered with available removable side windows. The Wayfarer was relatively simple in its engineering, retaining features like vacuum-powered windshield wipers and a single exterior lock on the passenger door.

Power under the hood comes from a rebuilt one-barrel L-head 230cid inline-six that received mechanical work including a new radiator, battery, wiring, hoses, and seals as part of the refurbishment. The transmission is a column-shifted, three-speed manual “fluid drive” unit.

In an interesting production decision, Dodge kept 1952 Wayfarers identical to 1951 models and did not even split out the sales numbers between years. The name was discontinued after 1952, and the Dodge Meadowbrook took the reins as the full-size entry-level offering from the brand.

Regarding this first-year Wayfarer, the seller concludes: “It runs and drives well, and cruising in it is like taking a trip back in time. It has been a four-year labor of love to restore this wonderful car. I hope that it ends up with someone who can truly enjoy it!”

The seller is asking $18,000 or best offer for this lovingly restored Wayfarer.