Finest expression of the Forward Look 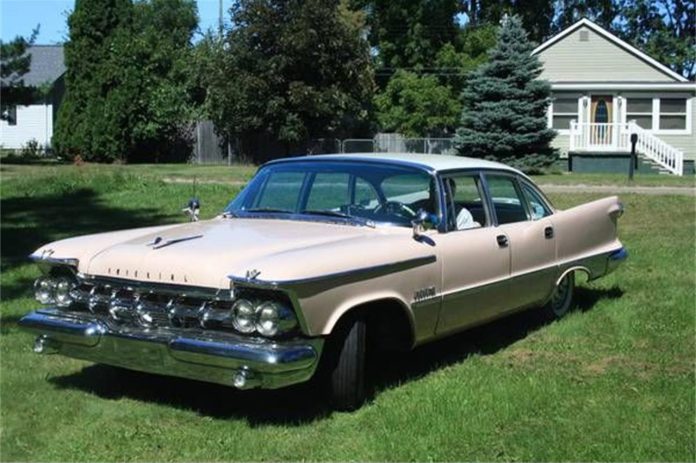 From the moment it broke away from Chrysler to become its own brand in 1955, Imperial was a looker, but Virgil Exner truly outdid himself with the 1957. Through three years, the Imperial received typical model year tweaks, with the 1959 being the last before Exner arguably started to take Imperial places that were not congruent with the times. This 1959 Imperial Crown four-door sedan on ClassicCars.com is a fine example of Exner’s talent, but its light pink color is what pushes it over into Pick of the Day status. It’s for sale by a dealer in Hobart, Indiana. (Click the link to view the listing)

The 1959 Imperial was offered in three models: Custom, Crown and Le Baron. Big news was the replacement for the 392 Hemi, a 413 rated at 350 horsepower that was at the head of the class in terms of power. To boot, the “Wedge” weighed 101 less than the Hemi and less than the competition.

While the toothy grille is somewhat garish to my eyes, the positioning of the headlights was lowered from the 1957-58, which was a nice tweak that kept it contemporary. Out back, the rear bumper appeared the same but was more of a full-width affair than two pods squeezing a license plate.

The seller of this 1959 Imperial does not specify which model it is, but by process of elimination we know it’s not a Le Baron because the model featured “Le Baron” badges on the side, plus it had a crown on the rear fender and two rings (instead of one) on the fins. Since the interior is leather, it must be a Crown because leather was not available on the Custom. Seller says, “All-original, in storage for the last 40 years,” with a claimed 42K miles. But, like I said earlier, it’s the Persian Pink color that sets this one off, which is complemented by an Ivory White top. “Perfect chrome and paint!” adds the seller.

The selling dealer is asking $28,000 for this photogenic Imperial. As the most roadable of the American luxury brands, this Forward Look Mopar has enormous road appeal for both driver and car-spotters.

Petition to Save the Hemi V8