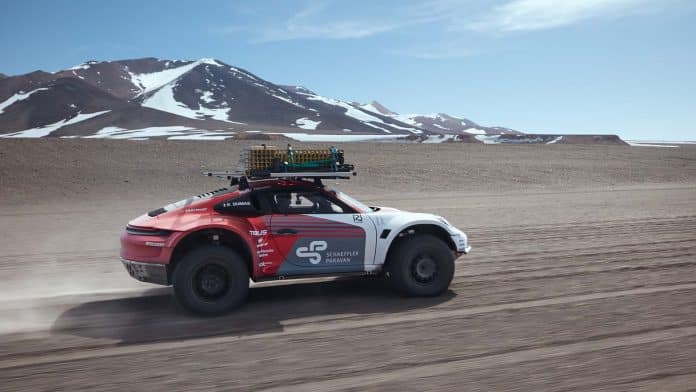 Porsche has been spotted testing a high-riding 911 Safari over the past year, but this is not that vehicle. What you’re looking at is a specially developed 911 off-roader built to tackle the world’s tallest volcano, Chile’s Ojos del Salado, which has its summit at 22,615 feet.

Porsche built two of the rugged 911s, both based on the Carrera 4S. They were driven by a team led by endurance racer and adventurer Romain Dumas to explore the limits of the 911. Dumas and his team reached a height of 19,708 feet, which is impressive given the thin air, temperatures as low as -22 degrees F, and a complete absence of roads.

The highest a vehicle has driven up the volcano is 21,961.94 feet, set by a pair of Mercedes-Benz Unimogs in 2020. That figure is an altitude record for climb achieved by a wheeled vehicle.

Tasked with making a low-slung sports car like the 911 capable of handling the rocky and icy terrain of the volcano’s slopes was Michael Rösler, chief engineer for the 911.

The car’s engine, a twin-turbo 3.0-liter flat-6 rated at 443 hp, was already able to cope well with the thin air, which is about half as dense as air at sea level. As a result, the primary focus was on modifications designed to handle the rough terrain.

The key modification were portal axles, which increased ground clearance to almost 14 inches and required widened wheel arches to be fitted. The 911’s 7-speed manual transmission remains, but was given lower gear ratios to allow for precise, gentle throttle inputs at low speed. The new ratios also work well with the large, off-road tires that were fitted, according to Porsche.

Porsche also installed a device called a Warp-Connecter. Adapted from motorsports, the device allows constant wheel loads even when the chassis experiences extreme movements, and as a result, it improves traction. Differential locks and a steer-by-wire system were also added.

For safety, the cars were fitted with roll cages, carbon-fiber bucket seats, harnesses, and a winch. Underbody protection, made from Aramid fiber, was also installed to allow sliding over rocks.

While Porsche doesn’t plan to put into production a 911 this rugged, the automaker is expected to launch a more capable version in the near future. Prototypes spotted in the wild featured a taller ride height and fixed rear wing.