A Legend in the Making: Restoring a 1995 Acura Legend LS Coupe

A Legend's second chance at life 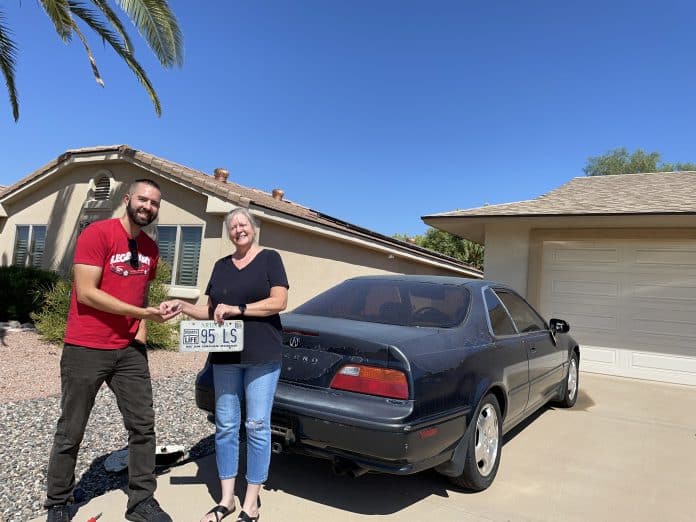 While taping in Burbank for my recent appearance on Jay Leno’s Garage, one of the comments that appraiser Donald Osborne made that stuck with me was, “The car you wanted when you were 17, you’ll buy at 40.”

And here I am. Forty years old, restoring a car that I first obsessed over as a teenager. Donald was right. And based on the strength of the RADwood movement – highlighted by a series of car shows dedicated exclusively to “new classic” 1980s and 1990s vehicles – I am definitely not alone. RADwood, by the way, has an event coming up in Los Angeles on November 19.

It’s no mystery that I’m afflicted with an “Acuraddiction.” Around the time my mom picked up our family’s first Acura – a 1990 Integra GS – in the mid-1990s, I was just getting into the automotive world with a fresh driver’s license and a souped-up Honda Prelude. When mom upgraded to a 1993 Legend sedan a couple of years later, that fueled the fire and I was drawn to the car’s “precision crafted performance” and luxurious looks.

Two days before my 19th birthday in 2000, I spotted a green 1995 Legend in my hometown in Utah. I looped back, stopped at the house for a closer look, and decided to knock on the door. I was greeted by Amy, from Phoenix, who was the car’s original owner. The Sherwood Green coupe was a rare six-speed manual with only 50,000 miles on the odometer. Amy gave me her phone number so we could stay in touch if she ever decided to sell the car.

Over twenty (!) years went by, and stay in touch I did. My graduate school program ended up relocating me to Phoenix where I reconnected with Amy in 2006. By then her Legend had begun to go downhill a little. I helped Amy source parts and resources over the years since she was determined to keep driving the car forever. By about 2018, she had moved in with her elderly father and bought a minivan for convenience and versatility.

The Legend deteriorated in the driveway. I would occasionally pass by to see it getting sunbaked each summer. The clear coat was flaking off, the tires were low, the seats were destroyed, and the engine hadn’t run in years. Sitting at 142,114 miles on expired license plates, the car was one phone call away from landing in a junkyard.

That brings us to September 2021. Amy sent me a text. “The Acura has gotten worse. Undrivable. Had to use the battery in another vehicle, oil has leaked out, power steering has leaked out, and the tires are dry rotted. The interior is trashed. Sending you pics to see if you (and a tow truck) want to come get her. I didn’t want to send her to the car graveyard before letting you know. Tyson, I don’t think she’s worth reviving.”

I’ve never dialed up a tow company as quickly as I did that day. I took her “not worth reviving” comment as a personal challenge. The car had tons of potential all along, and I was determined to prove it.

I attacked this long-awaited project in methodical sequence. The first order of business was coming up with a list of everything I knew I needed to do with the car. An Excel spreadsheet helped organize my thoughts, and the line count totaled a staggering 98 tasks. As of this writing, a year later, I’ve completed 69 of them and 10 are underway. I’m starting to see the light at the end of the tunnel, but the road hasn’t been easy.

Within a few weeks of having the car towed to my backyard, I had it running with fresh fluids and a new battery. Then began the daunting task of sourcing parts for the rebuild. I had to keep reminding myself that this car is 27 years old. The experience is like restoring a 1973 vehicle in the year 2000 – parts aren’t easy to come by. The Legend community, including a Facebook group with over 7,000 members, came to my aid throughout the process.

Mechanical work was completed, including a complete overhaul of the 3.2-liter Type II engine with new head gaskets, resurfaced heads, new rings, replacement hoses, and a fresh power steering system. That alone took a couple of months to complete. From there, I moved to interior cosmetics and had the seats reupholstered, sourced interior components from parts cars, had new carpet installed, and incorporated a replacement crack-free dashboard. Finally, I could see some progress.

Best of all, I’ve had the support of my YouTube community encouraging me along the way. The documentation of my progress has been shared in a series of five videos so far, and with each one, I have more and more people tuning in. An email came to my inbox after publishing the most recent episode. It was from a subscriber named Carlos in Houston. He said, “I’m trying to keep a 1995 Legend going. There are times that I get discouraged in my journey, but your videos help keep me motivated.” Messages like this keep me going, too.

As of this posting, the Legend and a supporting parts car are with a painter who is a known and trusted resource in the Phoenix import community. “This will take some time,” he said, when I dropped the car off. Even though it has rust-free “bones,” the car has its share of body damage including a mangled hood that will be scrapped.

Later down the road will come a set of refinished wheels, a new center console, and a mint-condition set of floor mats. And the icing on the cake will be calling Amy, arranging a visit, and letting her see the car restored to its former glory. My hope is to be at that stage within the next six or eight months. And eventually this car will see its first National Acura Legend Meet.

Eighteen-year-old me would be thrilled to know what I would eventually own and restore the Sherwood Green Legend. The twenty years it took to acquire it, and the two years it’s taking to restore it, are 100% worth it.

If, as Donald Osborne said, the collector car community is always expanding as time marches on, someday we’ll have people restoring 2022 Teslas. And I think that’s a beautiful thing. Nostalgia is all that matters.