Something for the weekend haul 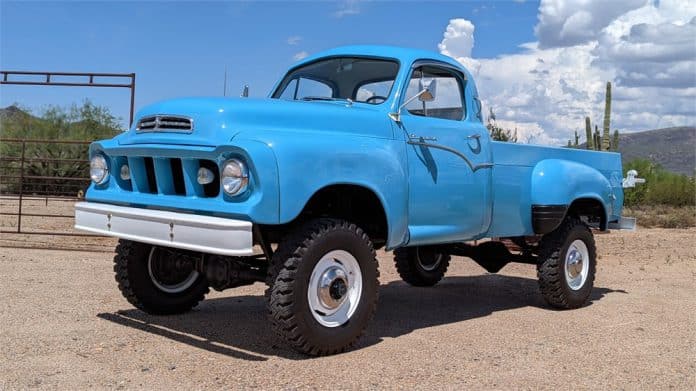 Another Friday, another set of AutoHunter Picks. For this week, the topic is pickup trucks. I have absolutely no interest in pickups unless it’s an El Camino or Ranchero (sign me up for one with a 429 Cobra Jet and Shaker!), but I know others do, so it’s my happy duty to bring something of interest for you, dear reader.

The goodness that existed with Chevrolet style in 1955 was extended to the pickup truck line. Sure, this one obviously looks like a pickup, but from the cab forward, you can see how Harley Earl’s team worked its magic. In fact, Chevrolet’s “In-Motion” styling looks better to these eyes than many cars from the same model year (sorry, Hudson). Imagine a brand with all its vehicles (passenger car, sports car, and trucks) being lookers across the board — can Chevrolet make that claim that today?

This 1955 Chevrolet 3100 pickup was treated to a restoration in 2012 and is powered by a more modern-yet-carbureted 350 V8 paired to a three-speed automatic. Though I am not an expert by any means, the interior seems to be redone in a non-stock pattern so whoever specified the design deserves kudos. I’m not a fan of technological anachronisms, so the modern instrument panel face doesn’t jibe with my paradigm, but it’s not a deal-breaker.

I think Studebaker is quite an interesting company. At its height in the 1930-40s, the company from South Bend made some interesting vehicles that are on par with anything else. Though not quite a fan of the “First by far with a post-war car,” I do think the “bullet-nose” facelifts are neat. And the 1953-54 Loewy coupes are possibly in the Top 3 of best-styled American cars from the 1950s, which is saying a lot … and how Studebaker carried it over into the 1960s is quite a miraculous story. I could continue into R-series performance cars from 1963-64 but I have a word count with which to contend!

So, maybe this 1959 Stude pickup lacks the style of the above Chevy, but it looks like you can beat on it yet it will emerge none the worse for wear. What’s great about this one is that this one has been fitted with a NAPCO 4×4 system. The Minneapolis-based Northwestern Auto Parts Companybegan to build four-wheel drive systems in the 1940s for several automobile manufacturers, most commonly for Chevrolet and GMC. In fact, they shipped kits to be converted by dealerships though, starting in the mid-1950s, the system could be ordered directly from certain automobile manufacturers, including Studebaker. This one features a four-barrel 289 and a five-speed manual transmission, which sounds like a load of fun. A Dana 60 rear axle adds to the security that this truck can handle anything.

No, NASCAR history doesn’t pique my interest in pickups any more, but racing history is gravy for any automobile. In this case, it’s not quite an automobile but a race truck. This one was piloted by Hendrick Motorsports driver Jack Sprague in the Camping World Truck Series. Jack won the championship in 1997, 1999 and 2001. Supposedly, this very vehicle placed first at New Hampshire Motor Speedway on July 21, 2001, and at Richmond Raceway on September 6, 2001.

As you’d expect, this pickup features bodywork that’s a tad more aerodynamic than what was available to you and me. Racing features include tubular roll cage, safety harness, hood retention pins, plexiglass windshield, tonneau cover that tilts open, rear spoiler and fuel cell. Power comes from a 383 small-block V8 with a Muncie close-ratio M21 four-speed handling the gear ratios. If you must ask if this is street-legal, then this truck is clearly not for you.