Here’s a selection of collectible vehicles going on the block 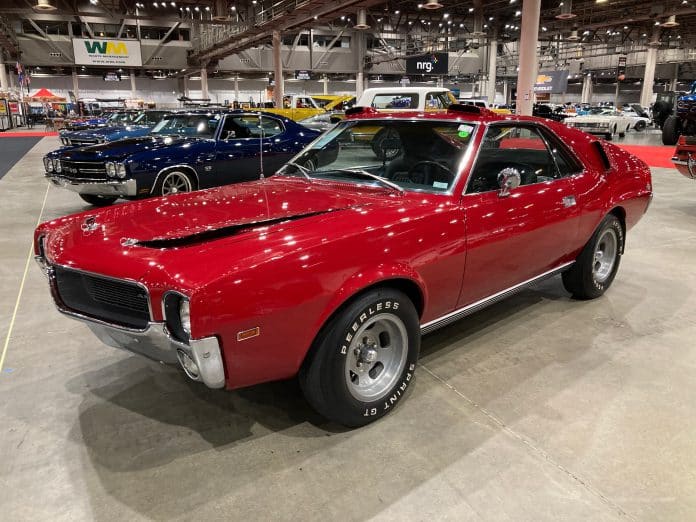 Barrett-Jackson’s Houston 2022 auction is a Lone Star State happening now through October 22nd. If you’ve ever been to any Barrett-Jackson auction, then you know there is a selection of cars that leaves no person wanting. What better time to spend before trick-or-treating than checking out several hundred vehicles plus a bunch of ephemeral automobilia?

Our folks out in the field have curated several vehicles worthy of note for you to peruse. Of course, you can check out the complete selection on Barrett-Jackson’s website but, for now, enjoy these selections.

1969 Mercury Cougar XR-7 convertible
Cougars play second fiddle to the Mustang, but it’s hard to ignore any car with hidden headlights and leather interior, right? Oddly, Mercury offered two versions of the 428 Cobra Jet in 1969: one with ram air (R-code), one without (Q-code). The ones without are somewhat odd because they lack the hood scoop and therefore look no different than those with a 351 two-barrel.

Interestingly, though the R-code cost more thanks to the ram air equipment, Q-codes are rarer—clearly buyers wanted that extra aura of performance. According to the Marti Report, only 39 XR-7 convertibles featured the Q-code combined with the C6 automatic transmission.

1969 Pontiac GTO Judge
Pontiac initially was planning on creating a fighter for the Plymouth Road Runner, but John DeLorean quashed that idea and instead demanded a deluxe GTO with stripes and spoiler. In its initial run, all Judges were produced in Carousel Red (the same color as the Camaro’s Hugger Orange) but, after two months or so, Pontiac allowed any GTO color to be used.

This one is Mayfair Maize, which was not an unusual color in the era but it’s quite unusual and rare to find on a Judge. Additionally, this Judge features a vinyl top, which were quite uncommon compared to regular GTOs. A 400 Ram Air III backed by a TH400 with console plus air conditioning comes off as being more GT than drag racer despite the boy-racer equipment.

1977 Lincoln Continental Mark V
It used to be that everyone knew who Mickey Gilley was, but time has marched on and his name resonates less, though he passed away this year at age 86. Not only was he a successful Country musician, but also he ran Gilley’s, a club in Pasadena, Texas that Hollywood made even more famous in the flick Urban Cowboy. Thanks to Gilley’s success with the song “Room Full of Roses,” it only seemed natural to order this Mark V in Rose Crystal metallic. If there’s a car at Barrett-Jackson Houston 2022 that’s pimpalicious, this is it.

1968 AMC AMX “Von Piranha”
Take a close glance at this AMX because there are several interesting modifications on this Kenosha-mobile that were sold with the car when new. Information is somewhat lacking, but it is believed a company called Thoroughbred Motors in Denver created a Von Piranha package that that included functional side scoops, non-functional roof scoops and a custom hood treatment that involved opening the bulges.

It is believed 20-ish were built, with all being sold in metro Denver AMC dealerships. Other than the body modifications, mild mods to the 390 and racing mags, it’s simply a regular AMX, which is nothing to sneeze at.

1970 Dodge Charger 500
Everyone loves Chargers, though fisticuffs will result when discussing whether the 1968, 1969 or 1970 is the best. To these eyes, the 1970 lacks the clean look of earlier Chargers, but the “Fast and the Furious” has made the ’70 stand out to millions of young boys around the world. Despite this, the Charger 500 trim level often confuses people because it’s not the NASCAR-spec Charger 500 built in 1969; rather, the base Charger was downgraded in equipment and the Charger 500 took its former place as the well-equipped Charger.

This “FY4” Light Gold Charger 500 is equipped with the best engine available in this model, a 383 Magnum. Only R/Ts came with the bumblebee stripe but the owner saw fit to add one.

1971 Mustang convertible
A weird thing about the Mustang is that Ford never offered a performance model for convertibles—sure, you could get a big-block Mustang convertible, but there was no dedicated model as, say, a Plymouth ‘Cuda. As such, Mustang convertibles can be rather plain, but the owner of this one added the Mach I grille, side stripes, NASA hood and front spoiler to create a Mach I look on a droptop.

The triple-white paint scheme is an unusual combo that is balanced with the stripes. The 302 is nothing special, despite being touted as “high-output,” but this is the Mustang convertible that Ford should have made available from the factory.

1978 Pontiac “Macho T/A”
Like the AMX above, the Macho T/A was a local specialty, though this one had national exposure. DKM Performance of Glendale, Arizona was the company that modified Trans Ams and sold them at Mecham Pontiac (that’s where the “M” comes from). Plenty of mods were done to properly fulfill the Trans Am’s mission despite being choked by emissions equipment, but the mods went beyond the engine—suspension mods including Konis were done, plus Macho T/As featured a fancy striped paint job to distinguish it from pedestrian examples, including the production sequence number.

A host of other mods were available for the willing buyer with money to burn. This white and red one is #11 of 204 built, but could you stand driving a car that has MACHO emblazoned on the side? I’d rock it.