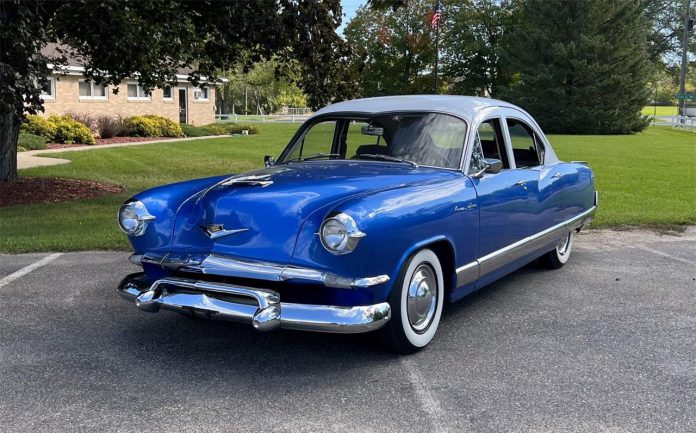 In an earlier era in America, there was this thing called “traveling salesman.” There actually were vehicles marketed towards this lifestyle, no different than a sedan delivery for a plumber. By the 1950s, as America continued to evolve past World War II, the life of a traveling salesman was on its way out, and vehicles being offered to this lifestyle were becoming fewer and fewer. Kaiser was among the last holdouts of this type of model, which is why this 1953 Kaiser Traveler offered by a Minnesota dealer on ClassicCars.com is the Pick of the Day. (Click the link to view the listing)

The Kaiser Traveler was developed starting in 1949, but really came into its own with the redesigned 1951 models. Touted as “the world’s most versatile car,” the Traveler was a “luxurious 6-passenger sedan” that converted into a cargo carrier in 10 seconds. It was like having a sedan with station wagon versatility or, if you prefer, a camp-on-wheels for two sportsmen thanks to the double-hinged rear deck. Most were offered in the Special and Deluxe trim levels, though at least one has been found in the upscale Manhattan series. Travelers also featured novel heavy-duty vinyl upholstery that was created by low-pressure refrigerator embossing. Some think the Traveler was the first hatchback, though more in function than style.

This 1953 Kaiser Deluxe Traveler is novel beyond its inherent traits as it’s been updated in several ways for modern living. “Gorgeous medium blue metallic and ivory base coat/clear coat finish for that sweet, wet, shiny look. All-new, expensive quality chrome. Totally straight, rust-free body to start with,” says the seller.

Looking in the engine bay, you’ll find the antiquated straight-six replaced by a 307 V8 from a 1969 Chevrolet, though the four-speed overdrive automatic is decidedly newer. A 1969 Camaro rear end with high gears makes highway cruising much more tolerable than the original powertrain combination.

Move to the interior and you’ll notice digital gauges in the instrument panel. Look around some more and the original vinyl has been updated with more modern, power-operated velour seats. “Power steering, power disc brakes (stops nice!). Detailed motor and motor bay, 12-volt rewire,” the seller adds. Safety hasn’t been ignored either thanks to shoulder belts from a newer vehicle.

Seller concludes, “If you love rare orphans, this is your opportunity for only $23,950.” With just over 900 built, this is a car that’s rare, but it features a form of practicality that works well today for the guy or gal who wants to have it all with a practical classic.