The oddball, mundane and truly awful appeared at the Chattanooga Motorcar Festival 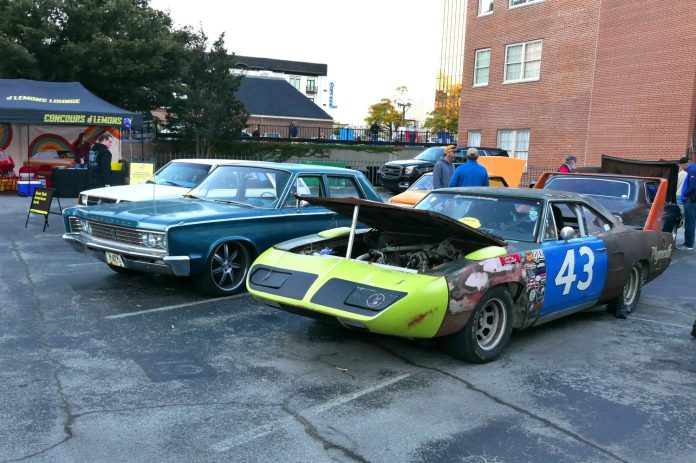 This past Saturday, October 15, 2022, marked the beginning of the events that make up the Chattanooga Motorcar Festival. The day began with something that, if you have not yet had your coffee in the morning, I then advise to turn back immediately and drink that first cup or three to better prepare you for what comes next. That event is the first time Hagerty’s Concours d’Lemons has darkened the streets of Chattanooga.

Being a first-time event — and a Lemons event at that — I had low expectations of what I would see, if not judge, as my friend Alan Galbraith (originator of the idea of a concours for the unloved) had volunteered me to play that role.

All kidding aside, the show field featured more than 30 cars, all of them either unexceptional, truly bad or ones with interesting custom modifications. The common denominator among them all was the enthusiastic and fun owners.

From a group of cars with custom mods, we had a pair of truly extraordinary “art cars.” For those not in-the-know, an art car is a vehicle that has been transformed into a true sculpture-on-wheels. There is an entire scene around art cars, and they vary from being truly awful to the extraordinary. The winning art car at the Chattanooga Lemons event was a 1997 Honda Civic owned by Kathryn Warren that was a tribute to the Rolling Stones. It was amazing that the car could move under its own power because, with the addition of the sculpture, it had to weigh close to 7,000 lbs. Even more amazing was the fact that the entire sculpture was created by a group of high school students. While a crazy-looking car, it was an fantastic sculpture on wheels.

Another crowd favorite was the winner of the Needlessly Complex Italian award, a 1987 Pontiac Mera (a Fiero with a Ferrari 308-inspired body) owned by Natalie Rauls. I have seen a number of these cars over the years, with this specific vehicle, finished in Fly Yellow, being the nicest example I have laid eyes on.

It may appear that there is a car that, while in poor condition, does not seem to belong: a Plymouth Road Runner Superbird. This car, though in rough shape, utilized a real, honest-to-goodness vintage NASCAR chassis around which the owner built the body. The owner had no idea as to what it originally was or who raced it, but he did mention that he paid $1500 for it about a year ago. Notice the person in one of the pictures of this vehicle — it is none other than Ray Evernham.

A different vehicle altogether was the winner of the Slightly Better Than a Go Kart class, a 1985 Honda CRX “Tie Fighter” owned by Rick Stern. Of course, in the spirit of the Concours d’Lemons, Rick and a friend showed their cosplay hand with cheap Darth Vader and Yoda costumes and staged a light saber battle in front of the Tie Fighter.

My two favorite cars of the event, aside of the Superbird, were the 1972 Dodge Colt owned by Nate Smith and the 1978 Pontiac Sunbird Safari wagon owned by Larry Leitz. The Colt was the wildest thing I have seen of 1970s Japanese vehicles. The owner had installed every factory performance option that was available when new, including a cam, twin Solex 40 side-draft carburetors, headers and much more. Horsepower increased from the stock 83 up to an amazing 116 horses. Not only did none of us judges knew that there were options like this but, also, we were stunned that this car had the whole catalog thrown at it. The Colt won the Worst of Class award in the Rust Belt American Junk Mopar Class.

The other car, a 1978 Pontiac Sunbird Sport Safari wagon, won the coveted Worst of Show award. This was a truly exceptional car and had been very well restored by owner Larry Leitz, though slightly modified using rare Vega wagon parts for the rear side windows, something Pontiac never used on the Sunbird.

If you are a car enthusiast and have never attended a Concours d’Lemons event, then you owe it to yourself to go to the next one that is near you. Better yet, go buy a Chrysler K car or something much worse and enter the show. I am not aware of another way to have more fun in the collector car hobby.

Monterey Car Week: Day 5 “I got to be a judge at the Concours d’Lemons”

Lemons sets its calendar of 2022 events