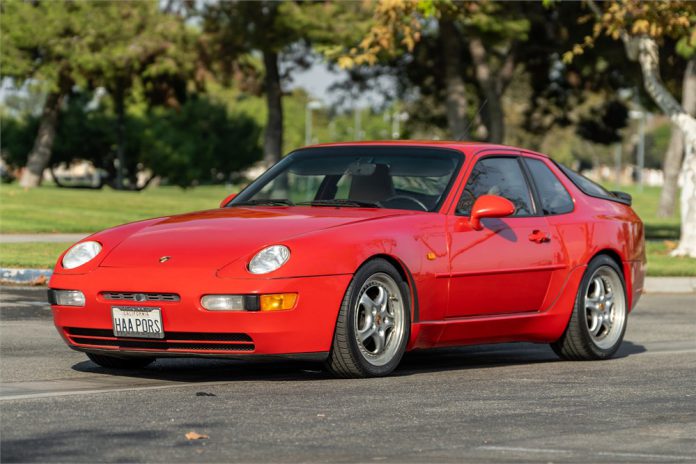 Featured on AutoHunter, the online auction platform driven by ClassicCars.com, is this 1992 Porsche 968 that has been with its original owner for 30 years. A stock 3.0-liter inline-four is connected to a six-speed manual transmission. During ownership, this Porsche has been upgraded with lowering springs, 17-inch wheels, Billy Boat Muffler and Kenwood stereo. New parts include the air conditioning system and Michelin tires. Finished in Guards Red over a tan leather interior, this garage-kept Porsche is available now and comes with receipts, a clean CARFAX report and clear California title in the seller’s name.

According to the seller, this Porsche features its original coat of Guards Red paint plus original-spec fog lights and black rear wing. The windshield was replaced with a new unit by Circle Porsche of Long Beach, California. A scratch on the passenger-side rocker panel is visible in the photo gallery.

The stock wheels have been upgraded with 17-inch units with Porsche crest center caps, all wrapped in new Michelin Pilot Sport All Season 4 tires.

Cabin furnishings include tan leather seating for four including matching door panels and carpeting. The cockpit is equipped with power windows, power front seats, sport pedals, air conditioning, a tinted windows upgrade and a Kenwood eXcelon AM/FM/CD head unit. The covered storage area under the rear hatch contains an Alpine V12 amplifier and a Bazooka EL Series subwoofer. The air conditioning system and various relays were replaced by Autowerkes of Huntington Beach, California, within the past six months.

The refurbished instrument panel includes a 180-mph speedometer, 7K+-rpm tachometer, and gauges for the coolant temperature, fuel level, oil pressure and voltage. The six-digit mechanical odometer shows 113K miles, which is consistent with the mileage shown on the CARFAX report.

Under the hood sits a naturally aspirated 3.0-liter inline-four that was factory-rated at 236 horsepower and 225 lb-ft of torque. The engine delivers output to the rear wheels through a six-speed manual gearbox.

This 968 has been lowered with replacement springs. According to the seller, this 968 breathes through a Billy Boat muffler, with the vehicle having passed the California-mandated smog test in March 2021. The video in the photo gallery shows the car idling and an exterior light check; additional photos of the underbody are available in the photo gallery.

The CARFAX report starts in February 1992 and shows an accident-free history in California. A pair of keys, receipts and owner’s manual will be included with the car.

Visit the AutoHunter listing for more information and photo gallery plus video.