A low-mileage Cobra with 320 horsepower 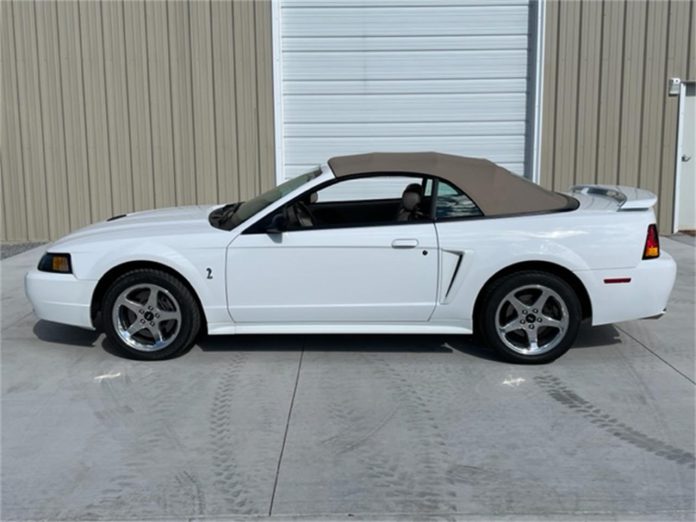 A vehicle can certainly be seen as a fashion statement, but it’s not every day you find a collector car for sale that also comes with his-and-hers accompanying jackets.

The Pick of the Day is a low-mileage 2001 Ford Mustang SVT Cobra convertible listed for sale on ClassicCars.com by a private seller in Reno, Nevada. (Click the link to view the listing)

“This is the finest fourth-generation Mustang Cobra SVT you will ever find,” the seller states. “I have had this car in my collection for approximately eight years, and it has been non-op for the last seven, stored in a climate-controlled building and run monthly.” At just 14,000 miles, it’s no wonder this 21-year-old Mustang looks fresh considering it was preserved long-term as a garage-queen.

Known under its internal code name of SN-95, the fourth-generation Mustang pony car debuted for the 1994 model year on a revised version of the Fox platform. The generation continued through 2004 but saw incremental updates to engineering, performance, and aesthetics. Ford called the 1999-and-newer models “New Edge” in reference to the sharper design language and creases in the body.

“The car is 100% original, including the mileage,” the listing reads. “The car looks like the day it was purchased in 2001.” Mechanically, it is also said to run and drive as one would expect for a car with just 14,000 miles. Power comes from a Cobra-specific, naturally aspirated 32-valve 4.6-liter V8 that generates 320 horsepower and 317 lb-ft of torque. Performance-wise, Car & Driver achieved a zero-to-sixty time of 4.8 seconds with this car. Each SVT motor bears a “Hand-Built with Pride” placard with engraved signatures from the technicians who completed the build.

As for those fashionable accessories, this Cobra comes with a California Custom car cover, a nose mask, and two medium-sized jackets – one with Shelby branding, and another with the Mustang pony logo. The jackets are said to be new and never worn. Combine the fresh apparel with a cream puff of a Mustang Cobra, and this becomes a compelling package deal for any Mustang enthusiast.

“If you can find a nicer, low-mileage Cobra convertible of this caliber, buy it,” the seller concludes.

The asking price is $28,500 for the car and its accompanying items.