Just don’t call it an Impala 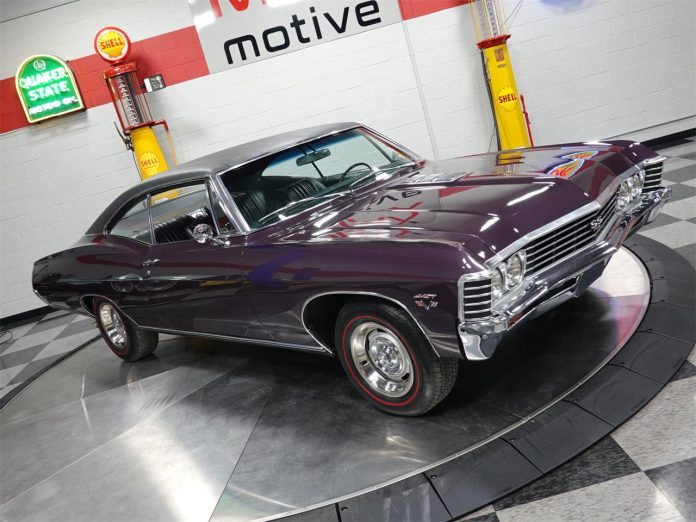 Chevrolet folks never let you forget that an Impala with the Z24 SS 427 package isn’t called an Impala as it doesn’t have Impala badges anywhere on it. Whether you want to fuss about the Impala logo on the rear seat, it’s still a car with a new identity, as the SS 427 package turned a 1967 Impala sport coupe or convertible into a big brother of the Chevelle SS 396.

The SS 427 package included a 385-horsepower 427 (L36) paired to a heavy-duty 3-speed manual transmission. Other features included with the Z24 package were a hood with special ornamentation, SS 427 badges fore and aft, special 427 engine badges unique to the Z24, SS wheel covers, Strato-bucket front seats with console or Strato-black seat with armrest, and a host of other upscale trim in and out.

There even were special eyebrow stripes on both fender peaks that were only available for cars equipped with the SS 427 package. Keep in mind that the 427 was available on other full-size Chevys including the regular Super Sport, but those are not SS 427s. Chevrolet offered a 425-horse version (L72) in 1966 and 1968-69, but for some reason it was not available in 1967, leaving the L36 as the only engine choice in 1967.

The Z24 package continued through 1969, but with slightly different content and features each year. In fact, there was no regular Super Sport in 1969, so the SS 427 was the only way to get a Super Sport before Chevrolet threw in the towel and abandoned the full-size muscle market (which barely existed even when the SS 427 debuted in 1967).

This SS 427 for sale on ClassicCars.com is painted in the gorgeous color of Royal Plum with a black vinyl top and new-for-1967 Rally wheels. The black interior features buckets with the console housing an M20 wide-ratio 4-speed transmission. A one-year-only appearance for round gauges is a neat feature for 1967 Chevys, but this particular vehicle also includes the factory gauge package, so you’re not surrounded by idiot lights during your Sunday drives.

Take special note of the tri-carb set-up on this Impala … er, SS 427. It was only available on the Corvette, rated at 400 horses in this state of tune. Tri-carb specs were not offered for big Chevrolets since 1961, though it’s rumored that the three simulated stacks on the hood were to signify a tri-carb option that did not make production. With 61,295 (though there’s no claim that it’s the original mileage), all this goodness will cost you $126,500, which includes the original owner’s manual.