Pick of the Day: 1974 Chevrolet Corvette 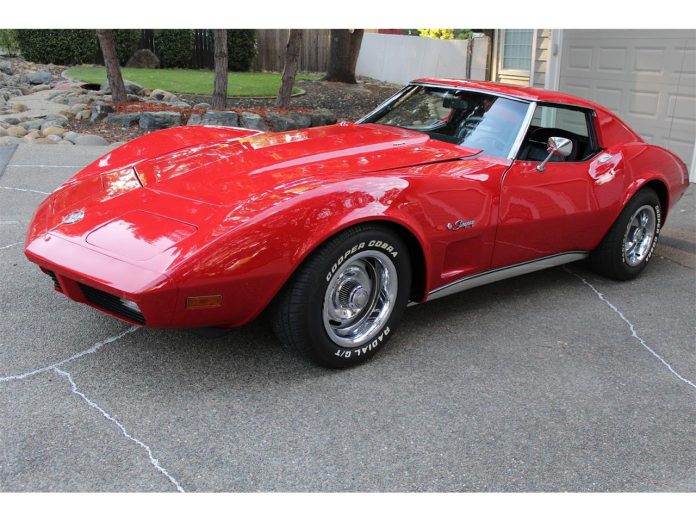 Even after three decades of ownership, one devout Corvette enthusiast is now ready to part ways with his pride and joy.

The Pick of the Day is a show-ready 1974 Chevrolet Corvette listed for sale on ClassicCars.com by a private seller in Cameron Park, California. (Click the link to view the listing)

“After 29 years of enjoying my ’74 Corvette big-block, sadly I need to let it go,” the listing states. “I have receipts totaling well over $90k, a bible of service receipts, WSCC judging sheets, and well over 80 awards and trophies.” WSCC, by the way, stands for Western States Corvette Council.

The third-generation, or C3, Corvette was introduced in 1968 with design language that was derived from a concept called the Mako Shark II that was drawn by Larry Shinoda. Its body and interior were all-new, and body styles were offered in coupe and convertible form. Signature features included vacuum-operated pop-up headlamps, hide-away windshield wipers, and flush door handles that were all utilized in the interest of aerodynamics.

By 1974, Chevrolet had made some updates to the fender vents, grille, and urethane front bumper. The Corvette took on a more touring demeanor with a quieter ride thanks to chassis refinements.

This Stingray from 1974 shows about 60k miles on the odometer, which the seller states is believed to be near the original miles. The 454cid big-block engine has been performance-built with a Comp cam, ported heads, high-compression pistons, and an aluminum radiator. Torque is sent to the pavement through a rebuilt M21 four-speed manual transmission and a rebuilt rear end.

Included in the sale are a variety of items including posters, a model car kit, several original tires, and a set of Rallye wheels. “I am a former WSCC judge and former NCRS member,” the seller states. “This car was being prepped for NCRS judging, and life got in the way.”

That organization, the National Corvette Restorers Society (NCRS), was established through what began as an informal meeting in the mid-1970s among Corvette enthusiasts and continues in existence today. The NCRS website offers a catalog of over 6,000 Corvette restoration topics on DVD and a marketplace of helpful books. In today’s era of YouTube shadetree mechanic DIY videos, it’s kind of fun to see an organization that still uses resources like actual books. Oh, and the apparel section has some fashionable embroidered denim shirts if you really want to look the part of a true Corvette owner.

For those keen on joining the fun, there is a Western States Corvette Council meet/drive taking place August 25-28. If you act quickly, maybe you can join the caravan in this hot ‘74.

The seller is asking $48,000 or best offer for this well-kept Corvette and all its accompanying swag.