Pick of the Day: 2011 Honda CR-Z, it was customized on “Mythbusters” 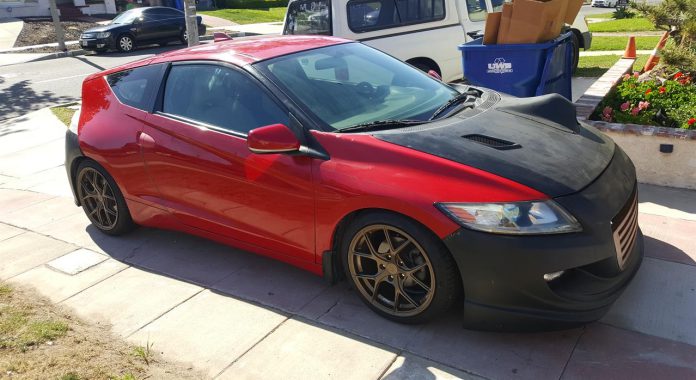 When it was getting close to retire my 2012 Chevrolet Camaro RS, its mileage was getting up there from my daily commute, I started shopping for a sporty car with good gas mileage. Finding a car that fell within my parameters wasn’t as easy as I assumed, but after researching a bunch of different options I narrowed my search to a pair of cars: Mini Cooper and the Honda CR-Z.

I thought the CR-Z had a sharp look, good gas mileage from its hybrid drivetrain, and functional performance, but it only had two seats. The lack of seats was the deal breaker and I went with a Mini Cooper. I’m happy with the choice, but I steal a glance when I see a CR-Z on the road.

The Pick of the Day stole my glance; a 2011 Honda CR-Z that made an appearance on the TV show Mythbusters. The CR-Z is listed for sale on ClassicCars.com by a private seller in Los Angeles, California. (Click the link to view the listing)

As a fan of the show and the car I was intrigued.

“This car was featured on tv show Motor Mythbusters “hotrod”. This vehicle was used in show to test the myth of whether adding a turbo would boost gas mileage,” the listing states. “On the episode it showed that mileage actually did improve on highway from about 40mpg to 42mpg after custom turbo was installed. But made street mileage go down a bit.

“As featured on tv show, legendary car fabricator Gene Winefield helped design a front and rear spoiler for this vehicle making this a one off example. Part of rear interior was removed for show.”

This is a project car, as the seller advises the CR-Z is not smog compliant due to the installation of the aftermarket turbo charger. Also, if you watch the video apparently a hybrid with a turbocharger makes a unique noise when you hit the gas.

Those negatives aside, this CR-Z has the potential to be a unique option for car shows, or maybe you could to take it to the track for a 1/4 mile. The pictures show a fairly straight body that needs some attention and paint. To me this a unique option, which varies on one’s local emission standards, for a fuel-efficient and turbocharged hybrid compact with an interesting back story.

The selling dealer is asking $15,500 or best offer for this 2011 Honda CR-Z and to view this listing on ClassicCars.com, see Pick of the Day.