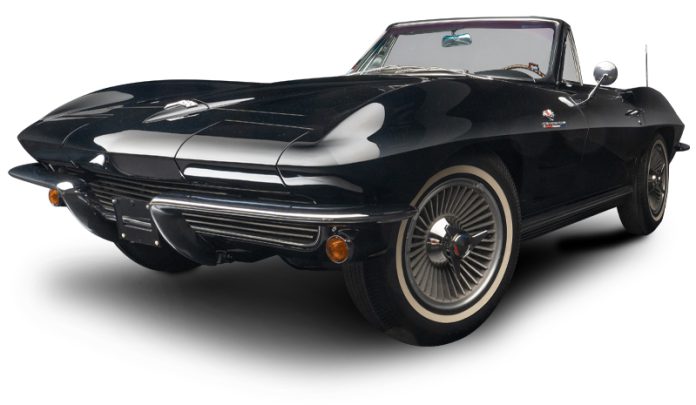 Dream Giveaway’s latest Classic Corvette giveaway has launched and we’re so excited with the grand-prize.

The big news is that the grand-prize is a midyear Sting Ray. (That makes two that Dream Givea-way is currently offering as the grand prize!) Split windows are getting harder to find these days, but honestly, this ’64 Sting Ray convertible is a chart-topper in its own right.

According to the NCRS shipping manifest, this curvy Corvette is a sunny Southern California na-tive, which sold new in La Habra, just outside of Los Angeles. A movie-star car? It sure looks like it with its Tuxedo Black exterior, super rare silver-covered seats, door panels and carpet, white convertible top and four-speed manual stick. There’s even a body-colored auxiliary hardtop that comes with the car because it never rains in California, but it sure does everyplace else, right?

Under the hood? That’s where you can practically hear a Hollywood director shout, “Lights, camera, action!” and the cameraman zooms in to reveal a concours-restored fuel-injected 327ci V-8 rated at 375 horsepower (up 10 ponies from the previous year).

This spectacular midyear Sting Ray is one of the nicest examples in the country, but you won’t be able to bid on it at a B-J auction. If you want it, click here to enter and be sure to note that you’re getting bonus tickets courtesy of ClassicCars.com every time you donate. (The minimum donation on this offer is $25, but you can donate as much as you’d like to increase your odds of winning!)

This marvelous midyear will look great in your driveway and it’s sure to be a trophy magnet whenever you take it to a car show. The National Corvette Restorer’s Society has awarded this gorgeous grand-prize Corvette with multiple accolades including the coveted Zora Arkus Duntov Mark of Excellence Award and Top-Flight.

Only 1,325 “fuelies” were built in 1964, and you’d be hard pressed to find one more beautiful than this Tuxedo Black over silver convertible.

Help out veterans’ and children’s charities and click here to enter now to win.