Just don’t call it a restomod 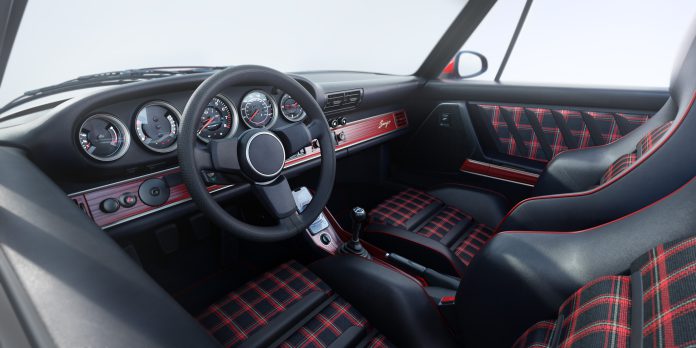 There’s a certain amount of irony in that a Brit is reengineering a German car in a world where several German auto manufacturers own British brands. Also ironic is that is that this Brit, whose company is based in Los Angeles, named his company Singer after being the singer in a band somewhat unknown to Americans (though the name was inspired by a Porsche engineer).

Very well. Singer Vehicle Design, as it’s properly known, has developed a sterling reputation for reimagined old Porsche 911s, and now the company has introduced its first 911 Cabriolet or, more specifically, a 930 ragtop, though truly a 964 cabrio. Confused?

Let’s add to the fog for a moment: Singer was once a British car company that was part of the Rootes Group before it was discontinued in 1970. Today’s Singer—no relation and again, to be proper, Singer Vehicle Design—generally takes a Porsche 964, which was the series of 911 produced from 1989-94, and drastically reengineers and rebodies them into the style of classic 911s built before 1989. The 930, on the other hand, was simply the 911 Turbo. So far, all Singer Vehicle Design models have been 964 coupes and Targas, but now company has announced the first Porsche 911 Cabriolet reimagined by Singer.

Called the Turbo Study, the reimagined Porsche is part of the company’s “exploration of forced induction” and the “celebration of the iconic Porsche 930 Turbo and the open-top driving experience.” Press releases being what they are, what Singer Vehicle Design is trying to say is that they’ve been toying with turbo engines and have developed a vehicle that has that special classic Porsche style with modern drivability and open-air extroversion. The Turbo Study also has reimagined the “iconic” turbo body, whale tail spoiler and shark fin. “Our goal with the Turbo Study is to distill the awesome thrill of Porsche’s first ‘supercar’ while reimagining its performance and refinement,” according to Rob Dickinson, founder and executive chairman. (More trivia: If his last name sounds like it’s shared with that of a famous Iron Maiden member, it’s because they’re cousins.)

The Cadiz Red cabriolet that you see here features carbon fiber bodywork, a 510-horse 3.8-liter flat-six with air-to-water intercooling, 6-speed manual transmission, carbon-ceramic braking system and automatic fabric hood, plus air conditioning and inductive phone charging. Special attention has been made addressing the engine, advanced materials, optimized driving, and performance. Of special note is the stiff, strong and lightweight carbon fiber body that emulates the 930 but “is reimagined to optimize aesthetic and functional performance.” Rear-wheel drive or all-wheel drive are up to the buyer. And as this is a bespoke vehicle, different grades of engine refinements are available to suit every driving style and speed.

Prices vary depending on specifications, but past Singer models have started at just below the half-million mark, and it would not be a surprise if this vehicle is at least twice that. If you happen to be at The Quail show on August 19, 2022, during Monterey Car Week, you will be able to take a gander at this new-fangled German with a Cockney accent.