VINData can help you find the history of your car 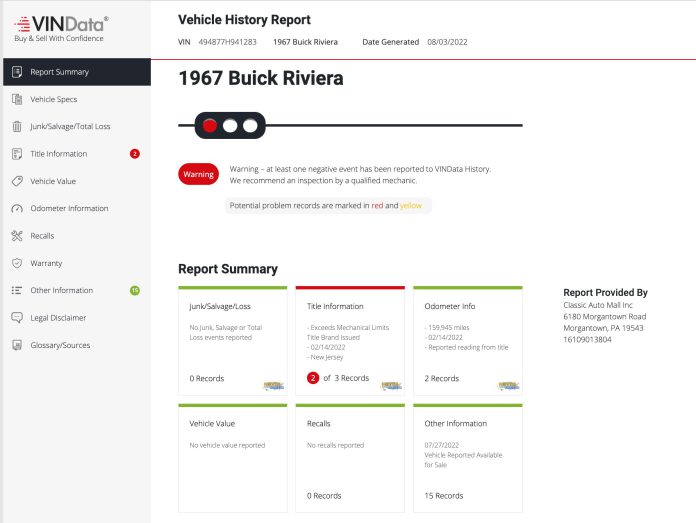 Traditionally, vehicle history reports have been limited to cars and light trucks with 17-digit VINs. This left out any vehicle that was manufactured prior to 1981. So-called classic, vintage and antique vehicles have been excluded from VIN check services. Buyers had to rely on seller provided documents or information left by mistake in the glove box. This could lead to accidental omissions or worse, outright fraud.

VINs are the critical information input for vehicle history reports. Most services require a valid VIN to generate a report.

The standard VIN patterns that manufacturers use today were introduced into the market with the 1981 model year vehicles. These VIN patterns ensure two things: uniqueness of the VIN (similar to a social security number) such that no two vehicles should ever have the same number, and that information in the VIN about the vehicle can be readily decoded. The decode information identifies the correct year, make, model and trim level and other vehicle specifications.

Many manufacturers started standardizing their VINs in the mid-1950s. But, prior to 1981, each manufacturer used their own numbering scheme, so it was possible that more than one vehicle was assigned the same VIN, and therefore decoding VINs across multiple manufacturers was not an easy task.

Pre-1950 or pre-war antique vehicles often have very short VINs with 7 or fewer characters. These are often just serial numbers. There’s generally no decode or pattern available for these very old vehicles. The odds that there was duplication between manufacturers for the “VIN” is higher than vehicles manufactured post 1955.  However, because very few of these older vehicles have survived, there isn’t a lot of VIN “bickering” with these old antique vehicles. Enthusiasts can be relatively sure that the serial number they have for the vehicle represents a unique vehicle.

In 1969, the US federal government mandated that vehicles have a VIN plate visible from outside the vehicle and located in the current standard location: embedded in the driver’s side dashboard. In vehicles manufactured before 1969, the VIN wasn’t in a standard location – it was wherever the manufacturer wanted to put it, if at all. Enthusiasts rely on locating the VIN based on where the manufacturer was supposed to put it, or on documents like title, registration and finance/insurance certificates.

State Bureaus or Departments of Motor Vehicles (BMV/DMV) are usually the state agency tasked titling and registering vehicles. The laws and regulations that each state has are different. But in every state, the DMV title is the document that establishes ownership and other legal details like the title “brand” status, lienholder, and the odometer reading. Fortunately, title documents are the same regardless of the age of the vehicle. Title information should be considered the foundation of any vehicle history report because it’s the most important legal document.

For daily driver cars and light trucks that have been manufactured in the last 25 years, there is almost always at least one DMV title record available. There are some instances where title records are not available:

For pre-1981 classics there can be other reasons why there isn’t a title record available. Every state DMV reports their data to the central federal government database known as NMVTIS (National Motor Vehicle Title Information System). This database is the database of record as DMVs also use it to compare information when they are titling vehicles. Each state has different earliest reported record date. Some states’ title records go far back and report titles that were issued in the 1960s and even earlier. Other states’ reported records only go back to the 2000s.

The good news is that while a vehicle may not have a record in NMVTIS today, when it gets titled by the DMV the next time – it likely will! The DMV will record the brand status, any liens, and other details about the vehicle in their own databases, and then overnight it will be available in the NMVTIS database.

When shopping or selling a classic or modern car or truck, or you just want to learn more about the ride you have today, get a history report from VINData, with official NMVTIS title and other data.