More illogical moves during the muscle car era, this time from Pontiac, Dodge, and FoMoCo 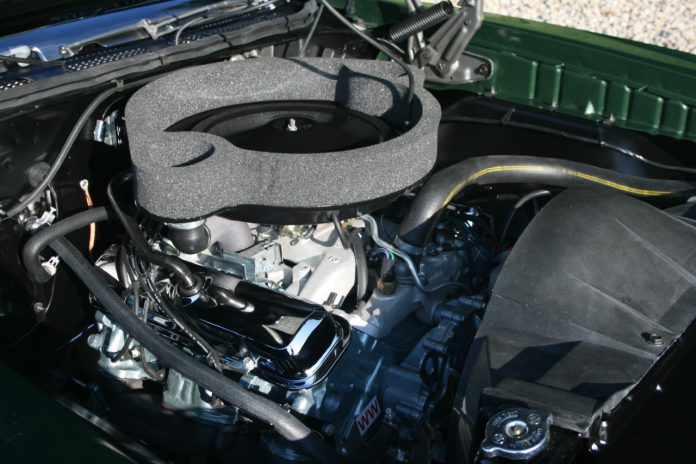 The car world has tons of trivia: Why did Chrysler put the Pentastar on the right side of the front fender? So, a pedestrian would notice it when parallel parked on the street. Why did Ford call the Mustang “T5” in Germany? Because a truck manufacturer owned the rights to the Mustang name through 1979.

Pretty interesting, right? Like the Chevy trivia The ClassicCars.com Journal ran a few days ago, here are some more anomalies from the muscle car world that have had enthusiasts scratching their collective heads.

One of the reasons why 1970 is considered the high-water mark for the muscle car era is because General Motors rescinded its edict limiting A-bodies to 400ci. As a result, Buick, Chevrolet, and Oldsmobile produced their top engines in 7.4/7.5L: 455 Stage 1, LS6, 454 and 455 W-30, respectively. Pontiac’s 455, on the other hand, was not the brand’s strongest—the 400 Ram Air IV held that distinction.

What made the Ram Air IV special, among its cam, exhaust manifolds and other equipment, was its round-port heads. Pontiac’s other engines had what’s characterized as D-port heads. Why didn’t Pontiac use the round-port heads on the 455 in 1970?

A guess would be that Pontiac was banking on the upcoming Ram Air V to handle the top performers from Brand X, but the RAV ended up being cancelled due to impending emissions regulations (though one could build a legitimate RAV via the parts department). Pontiac also had a new general manager with a reputation of not being fond of high-performance, which may have been another factor.

Remember the 1969 GTO Judge? It originally was created to do battle with the Plymouth Road Runner but, instead, was made into a deluxe GTO with an upgraded engine. However, a car that was to do battle with the Road Runner arrived in the spring of 1970 and was called the GT-37. It was a Tempest T-37 with the GT package, which gave you a standard 350 2bbl. engine with floor-shifted 3-speed manual, dual exhausts with extensions, hood pins, G70 x 14 white-letter tires on Rally II mags without trim rings, 1969 Judge stripes and special GT-37 identification.

That equipment alone is not quite muscle material, but order the 330-horsepower 400 and you would have a car suited to giving the Road Runner a run for its money. However, your choice in transmission would determine how competitive your GT-37 would be: a 400 with automatic received small-valve heads like that from the Catalina’s 400; a 400 with 3- or 4-speed manual received big-valve heads, like the 400 from the GTO. In fact, the latter engine was exactly like the engine that was standard on the GTO (though it was rated at 350 horsepower).

Why Pontiac made a distinction between the two 400s based on transmission, while the same engine in the GTO featured the same heads no matter what transmission, is a question in which no one’s been able to answer.

Ford and Mercury generally handled things identically. For example, if you ordered a 1969 Mustang with the 428 Cobra Jet, you could order the version without ram air (which had a Q in the 5th character of the VIN) or with (which had an R in the 5th character); if you ordered a Cougar with either engine, it would be the same story. In other words, for whatever reason, Ford offered two nearly identical CJs that only differed by the inclusion of ram air.

But for 1970, the two brands handled things differently. In this case, the 1970 Mustang was the same as in 1969, having two Cobra Jets available and using the same engine codes in the VIN. However, the Cougar only had a Q-code CJ. Does that mean the 1970 Cougar was not available with a CJ with ram air? No, because Mercury offered ram air as an option instead of as part of an engine package.

The same methodology carried over into the mid-size cars. Order any Fairlane 500, Torino Cobra, Torino, Torino GT, Torino Brougham or 1970½ Falcon with the 429 Cobra Jet and your VIN would have a C in the 5th character. Want ram air? Then the code in the VIN would be a J.

But at Mercury, order any Cyclone (standard, Cyclone GT or Cyclone Spoiler) with the 429 Cobra Jet and you’d find a C in the VIN; if you wanted ram air, you’d have to order it separately.

Even more strange is that, for 1971, the engine codes for Fords and Mercurys were in line with each other, so Mercurys with 429 Cobra Jets could have a C or a J in the VIN. Nineteen seventy was not the only year this happened (look into 289 Hi-Po Comets, as they aren’t K-codes like Mustangs and Fairlanes), but it’s not a common thing in the world of Dearborn.

The 1970 Challenger was late to the pony car party, but Dodge had time to survey the market and take notes. As such, the Challenger was a sales success—more so than the Barracuda—though the market for pony cars and other sporty vehicles was falling by 1970.

Nonetheless, while Dodge and Plymouth are relative twins, they were two different organizations. In the case of Plymouth, the performance pony car was called the ‘Cuda and came standard with a 383; optional was a 340, 440, 440 6bbl. and 426 Hemi. On Dodge’s side, there was the Challenger R/T that came with a standard 383, with 440, 440 Six Pack, and 426 Hemi available as options.

So, what happened to the 340? For whatever reason, Dodge didn’t include the 340 as part of the R/T performance model in 1970, instead offering a Challenger 340 Performance Package (sales code A66) for the standard Challenger hardtop and convertible. Aside of the 340, the package included F70 x 14 tires, R/T performance hood, heavy-duty brakes and suspension, and bumble bee stripe with Scat Pack decal on the rear-quarter window. Though not an R/T, the Challenger with the A66 package was considered a bona fide member of the Scat Pack, as evidenced by the standard bumblebee stripe and the rear-quarter decal.

In 1971, however, Dodge played the game slightly differently: the 340 became a regular engine option and not part of a package, and now it was also a no-cost option for the Challenger R/T. Why the different approach? Only product planners of the time may know.

In 1968, Ford Motor Company introduced the 429 Thunder Jet, sometimes called the 429 4V. It was available in the Thunderbird and expanded to full-size Ford and Mercury vehicles in 1969, plus a NASCAR version was used for the Boss 429 Mustang. In 1970, the 429 4V and an upgraded performance version, the 429 Cobra Jet, became available for most Ford and Mercury mid-size cars.

The 429 Cobra Jet replaced the 428 CJ in 1971 for the redesigned 1971 Ford Mustang and Mercury Cougar. The Drag Pack returned too, now with the choice of 3.91 or 4.11 gears (the latter with Detroit Locker rear) but, for some reason, only Mustangs were built with this package. If you see someone claiming to own a 1971 Torino, Cyclone, or Cougar with the Drag Pack, be suspicious because there are no factory records per Marti Auto Works, the company anointed with maintaining Ford’s invoices. As far as to why, probably no one can even guess, though we know from other anomalies that the impending doom and gloom in the industry may have played a part with product planners.