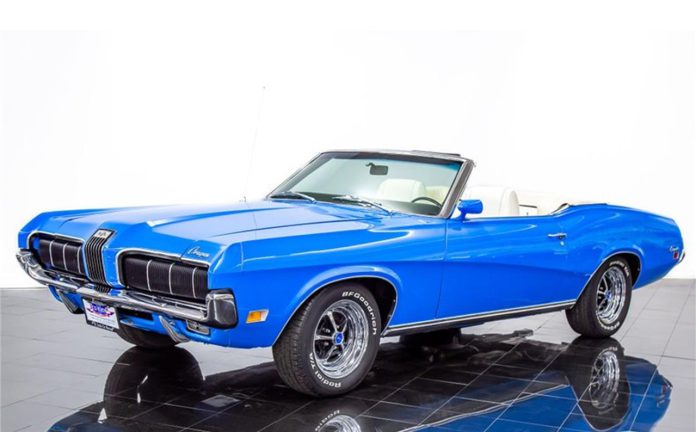 Cougars may play second fiddle to the Mustang, but they have their fans and don’t get lost in the Pony Car shuffle.

The Pick of the Day is a prime example of the breed: a 1970 Mercury Cougar XR-7 convertible in Competition Blue listed for sale on ClassicCars.com by a dealer in St. Louis. With a color that isn’t your usual tawny tones, this convertible truly stands out. (Click the link to view the listing)

In 1970, the Cougar was in its second year of its second styling cycle, bringing back the “Lectric Shave” grille with a mini grille bisecting it. Trim levels continued to be the standard Cougar and the Cougar XR-7, the latter coming with more standard options, leather-trimmed interior and more brightwork. This particular Cougar is an XR-7 so it is bathing in upscale accoutrements compared to your usual Mustang including a standard V-8 (in this case the standard 351 with 2bbl.). These engines came in both Windsor and Cleveland varieties, with this particular Cougar having the former connected to the trusty 3-speed FMX Select-Shift automatic.

Of course, what makes this Cougar stand out from the crowd is the color. While Competition Blue (identical to Ford’s Grabber Blue) is more commonly associated with the Cougar Eliminator, it’s quite rare on more pedestrian Cougars—the Marti Report shows that 37 XR-7 convertibles were built in this color, with 22 of those featuring the white leather bucket seat interior with black components. All this visual greatness is complemented by a white power-operated top. Other notable options per the Marti paperwork include console, air conditioning, AM/8-track Stereo radio and tinted glass.

Seller claims this Cougar has 90,449 miles on the odometer and has had an older cosmetic restoration that included a repaint, new top and extensive detailing, with the interior appearing largely original. Upgrades from the previous owner include 15-inch Magnum 500 mags with white-letter radials, and a more modern AM/FM/cassette radio. “Our experienced team changed the high-beam bulbs, oil pressure switch, and installed a new air filter,” reads the listing. This combination of luxury, style and sportiness can be yours for $59,900.