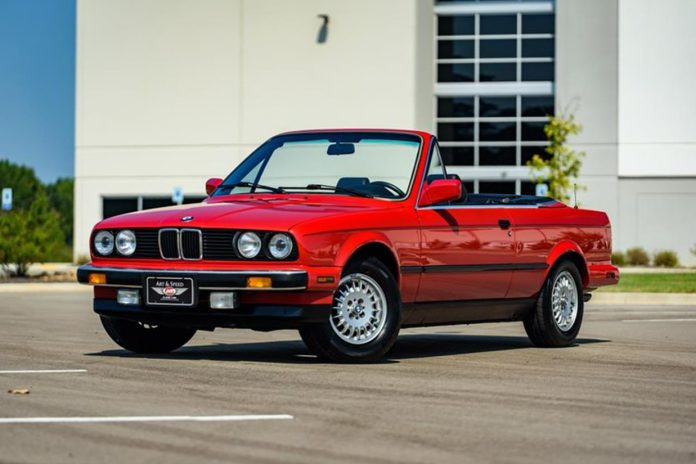 I remember the first time I saw an ad for the new BMW 3 series convertible in 1987. It showed the sun rising at a location with palm trees, and then cut to a closeup of the front of the hood with the BMW roundel featured prominently. The ad continued with a long shot of a woman closing the rear tonneau cover and then a closeup of the woman putting on suntan lotion.

Cut to a closeup of her taking the keys and then a closing shot of her driving away in the car. The only audio was at the end where the announcer simply states “The BMW 325i convertible. The ultimate tanning machine.”

When I first saw this commercial I thought it was sheer brilliance in advertising that made me desperately want one of these cars. The 325i convertible just seemed to define 1980s cool.

About three months later I had the opportunity to drive one. I was in college at the time and my friend Larry turned up one night in a brand new 325i convertible. He asked if I wanted to drive it, and of course I answered affirmatively and we drove for a few hours that night in the Arizona desert.

What I noticed while driving that 325i convertible was the build quality. That convertible was the second E30 car I had driven, the first being a 318i, and with the top lowered and the windows up, the car’s cockpit was not buffeted by the wind. It was a pleasant car top up or down. The best word I can think of to describe it is “civilized”. Also with the top down that night in the Arizona desert hit was like having the worlds larges sunroof. The stars in the night sky had never looked better to me than the did on that evening.

Also, the BMW inline-six was so silky smooth, sounded amazing and was much better than the 318i I had driven a few years before. The performance seemed quite strong at the time and the car just felt special. It was love at first drive and a few days ago I had the opportunity to drive one of these wonderful cars for the first time in years.

Unlike other cars from the era it still held up over time. It was just as fun and civilized as I remembered. But it was also sporty and precise with plenty of power and light sure-footed handling. In fact I might buy it. As a result I decided that I immediately needed to find a 325i convertible on ClassicCars.com for a Pick of the Day this week.

The Pick of the Day looks to be a truly excellent example, a 1989 325i convertible finished in red with a black interior. (Click the link to view the listing)

This BMW is basically a time capsule, having covered only 35k miles from new. The Collierville, Tennessee dealer offering this 325i describes it as having factory original red paint in show condition, and the black cloth retractable top looking brand new as well.

They add that the black leather interior is also immaculate, as are the factory aluminum wheels. Mechanically, they state that this BMW runs and operates as new, and is a pleasure to drive. The only real flaw I saw was that it looks like the material around the onboard computer seems to be shrinking a bit.

Yes, it is an equipped with an automatic transmission instead of a five-speed manual but after driving the auto equipped 325i early this week I would not get too hung up on that. Even with the automatic the 325i is a fun car to drive, and less of a hassle than a manual in stop-and-go traffic.

It is getting difficult to find a truly great low mileage E30 BMW, and the asking price of $23,900 may end up looking like a smart buy if this market continues to rise. Also it’s priced less than the car cost new in 1989, so it looks like a great deal to me for a car as nice as it appears to be.