Rotary power in a convertible with less than 98,000 miles 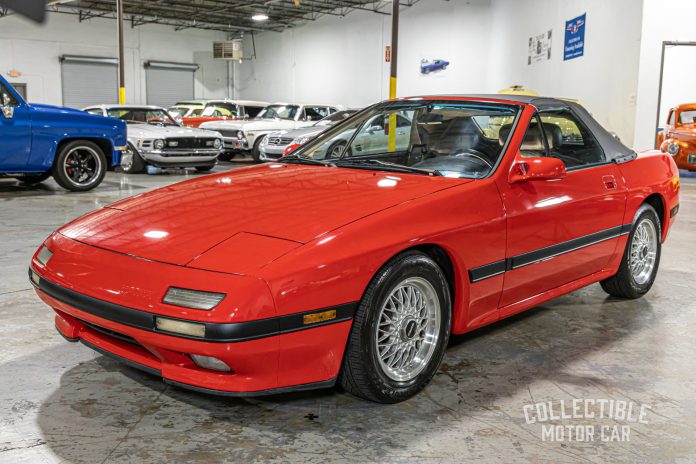 Mazda went a different direction when they began using the Wankel engine in the 1960s. Decried for their tendency to use a more oil than their piston counterparts Mazda phased out the Wankel at the end of the RX-8’s run in 2012, but there are still fond memories for the engine.

“It’s not the torquiest engine in the world, or the most economical, but God it’s smooth,” said Jeremy Clarkson in a season three episode of Top Gear about the Wankel rotary engine. “You even get a little buzzer – ready? – to tell you to change gear at 9000 RPM ’cause it doesn’t feel like it’s running on anything as coarse and vulgar as petrol. Feels like it’s running on double cream!”

Mazda has relegated the Wankel to racing endeavors only, but there are plenty of RX-7s to fulfill your needs to own a sports car with an unconventional engines.

The Pick of the Day is this 1989 Mazda RX-7 convertible listed for sale on ClassicCars.com by a dealer in Marietta, Georgia. (Click the link to view the listing)

“The level of gloss and shine you see today is a testament to both the quality work of Mazda and how well this RX-7 has been respected from day one,” the listing states. “But what we really love about these second-generation cars is that Mazda offered a European exotic level of design, while still retaining the Japanese build quality.

“So, the headlights fit flush against the body; the black folding roof remains taut; and the 15-inch factory BBS wheels appear to have never done a parking lot battle. The result is a car that looks far younger than its age would suggest.”

This Mazda has less than 98,000 miles and is equipped with air conditioning, factory AM/FM/CD/cassette stereo, power locks, and cruise control. Yes it has low mileage, but a car like this is meant to be driven, not hidden in a garage as a form of investment speculation in the 1980s RX-7 segment.

The asking price is $19,90 for this 1989 Mazda RX-7 convertible and drop top cruising is the best way to experience a high-revving Wankel engine.