A proper sequel to the CRX 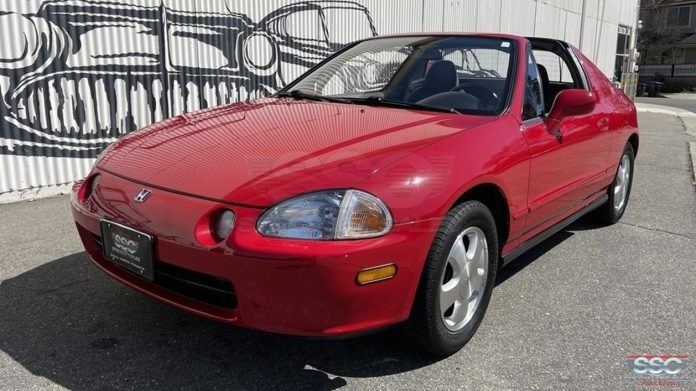 The sequel isn’t always as good as the original. Or in some instances we hold the original in such a high degree that there is no way for sequel to get a fair shake. In hindsight we might realize that the next chapter was great, but the impressions we originally had are hard to shake.

This convoluted analogy can carry over to cars, not just Star Wars movies or Oasis albums. With the classic car market on the rise we can find those treasures obscured by their predecessors and maybe give the next chapter its proper due.

The Pick of the Day is a 1994 Honda Del Sol listed for sale on ClassicCars.com by a dealer in Fairfield, California. (Click the link to view the listing)

It was supposed to be the next chapter, or heir, to the Honda CRX but never caught traction despite being the next evolutionary state as a two-seat, sporty Honda with good gas mileage, and Honda reliablity.

It has a Targa top for open air cruising, a strong profile with rounded-off edges, and a diminutive stature that gives it a go kart vibe. Many of those listed traits described the CRX, but the Del Sol was always marginalized.

The one available on ClassicCars.com is powered by a four-cylinder 1.6-liter VTEC DOHC engine that produced a factory-rated 160 bhp when new. The engine is paired with five-speed manual transmission and the listing advises that this three-owner Honda has less than 95,000 miles.

“In terms of condition,” the listing states. “This 1994 Honda del Sol DOHC VTEC Coupe shows well in person with very clean body lines, minimal dings and scratches, and above average shiny exterior paint. The interior is also in very good overall condition with the exception of the drivers seat bolster which has some deterioration and wear apparent.”

The asking price for this Honda Del Sol is $15,990 and for those in the know you’re getting a sporty coupe with a Targa top and a high-revving Honda engine. It never took off like the CRX and history has generally forgotten the Del Sol, but it was a proper sequel to a great original.