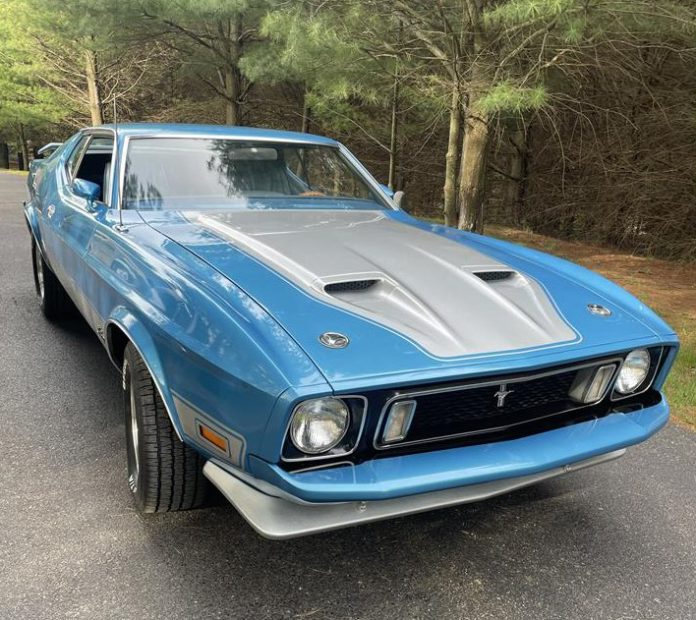 While I am not a big muscle car guy there are a few cars from the muscle car segment that I have always liked. My favorite is not a Hemi ‘Cuda or a first generation Camaro, but something a bit different: the 1971-1973 Ford Mustang Mach 1.

Now I am guessing you are all thinking, why the 71-73 Mach 1? You are correct thinking there are better muscle cars out there and better versions of the Mustang, but let me explain.

First, for many of you who have met me in person at an auction tour or a seminar, you know that I am a big James Bond fan. Also, one of my favorite Bond films is the last official Bond film featuring Sean Connery as 007 Diamonds Are Forever. It was truly the end of an era for the franchise and I feel it still holds up well more than 50 years after its release. That film featured Bond driving a 1971 Mustang Mach 1 in a car chase thru Las Vegas.

Also, my mom bought a new 1972 Mach 1 and my 6-year-old self simply loved that car. She got two speeding tickets that I am aware of, as I was in the car when she received both tickets. I loved that car, and it was my favorite car that my ever family owned. In fact I tried to drive it when I was 8-years-old and I rolled it backwards slowly into a ditch. The car was not damaged, but I was in trouble.

Sadly, she sold the car a few years later. I found out later from my dad it was because she received a few more tickets while driving it.

The Pick of the Day is one of these final generation classic Mustangs; a 1973 Mustang Mach 1 in correct Ford Medium Blue paint with silver accents and a blue interior.

The owner of the car in LaValle, Wisconsin describes this Mach 1 as a having a matching-numbers 351 2V Cleveland V8 engine with an automatic transmission. They add that the engine and transmission have both been rebuilt recently. More recent work on this car includes new brakes, new exhaust, good paint, new carpet front seat covers, new gauges, and a new gas tank.

They further state this Mach 1 has been under restoration since 1994 by two previous owners. He purchased it last year to finish the car as a winter project. He closes by calling it a very nice driver that won’t embarrass you at a show.

There are many pictures included in the ad that show all the elements of the car, including photos of the car during the paint and restoration phases. He also goes out of his way to point out flaws the car has in these pictures.

While fans of the earlier Mustangs don’t always think highly of these cars. As drivers the 1971-1973 Mustang is a nicely built car that makes for a fun GT with good performance, especially with the 351 Cleveland V8 under the hood. If you want more power just add an Edelbrock Performer aluminum intake manifold and a four-barrel carb. Be sure to save the original parts though, as the car is worth more with those parts still available.

The asking price for this Mustang Mach 1 is a very reasonable $27,500 or best offer, and would make a nice addition to any garage.