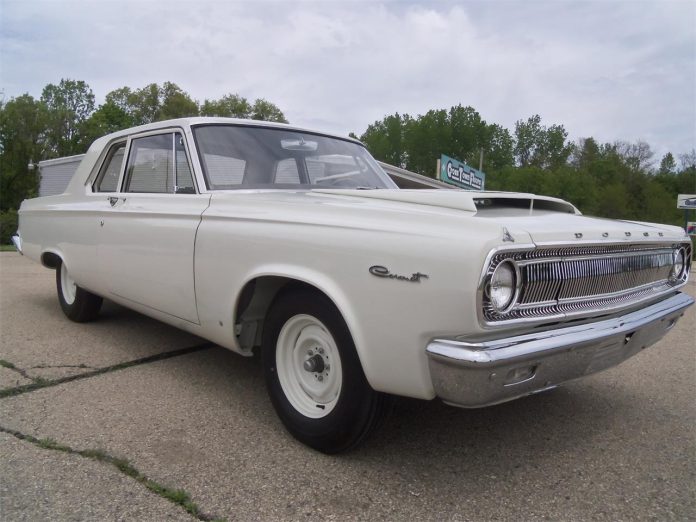 Win on Sunday and sell on Monday is a long-gone concept. With drag cars and stock cars no longer looking like their road going, passenger car siblings there is less emphasis on a vehicle’s race pedigree to enhance sales. But there was an era where the idea of winning on Sunday carried over to increased car sales and sometimes you can find one with a great performance history backed up with documentation.

The Pick of the Day is a 1965 Dodge Coronet two-door sedan A990 listed for sale on ClassicCars.com by a dealer in Jefferson, Wisconsin. (Click the link to view the listing)

“Evidence that this is a true A990 car would include the never used mounting holes for the battery, splash guards and sill plates,” the listing states. “The mounting of the transverse muffler and battery includes specially placed bolts. The engine components are unique for 1965.

“It is very fortunate that all three owners retained some of the original documents from when the car was sold new.  The Purchase Order and Manufacturer’s Statement of Origin are in the binder.  This car was not street driven, thus is was not registered or titled until 2017, when it was titled in WI. The IBM Build Card was retained. Galen Govier has decoded the IBM Card and the Fender Tag and his report is included.”

This Coronet is a true factory drag car that’s powered by a date-code correct 426 Hemi rebuilt by Wheeler Racing Engines of Minneapolis. The listing states that it was, “prepared with Clevite bearings, Isky 590 degree cam, springs and retainers. The Prestolite ignition still fires the distributor. The original factory designed steel headers have been restored.”

The engine is paired with a 727 automatic transmission that the listing advises, “were built without a park pawl and had high stall torque convertors and a manual valve body with reverse shifting pattern.  The reverse shift pattern and no park are labelled on the column shift indicator.”

This Hemi Coronet’s history can be traced back to its inception and its documentation helps verify its pedigree.

“This car was sold new by Kolesar’s Garage of Westfield, PA to George McAndrews of Wellsville, NY,” the listing states. “George traded his 1965 Coronet and $1000 cash to get this factory built drag car with A990 engine.”

This Mopar is legit museum piece, and the $179,995 sticker price reflects its prominence. To view the listing on ClassicCars.com, see Pick of the Day.

Pick of the Day: 1955 Imperial Newport