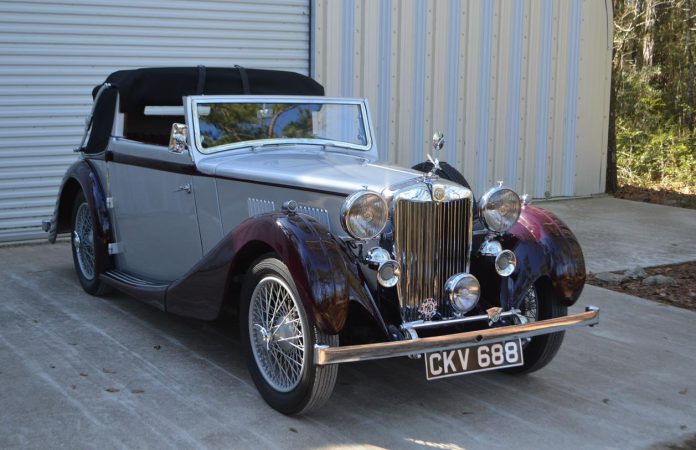 MG is one of the most important manufacturers in the history of sports cars for American consumers. During World War II U.S. servicemen stationed in England saw British sports cars and as soldiers returned home a few were accompanied by MGs, mostly T series cars. This action started the sports car craze in the U.S.

The T series cars were popular for many simple reasons; they were fun to drive, affordable, and simple to service. They were built at a price point which made their sales strong for years to come.

That being said, there were also higher end sport cars built by MG which included coach-built bodies and higher specification engines. These cars disappeared after the war due to production costs and seeing one of these cars in person today is a rare treat.

The Pick of the Day is one of these special MGs, a 1937 MG VA drophead coupe with Tickford coachwork built by Salmons & Sons. (Click the hyperlink to view the listing)

This MG VA is being for sale on ClassicCars.com by a private seller in Abilene, Texas.

The ad states very little about the specifics of this car other than that they call it, “The Prince of MG’s.”

They add that the car was limited in production with a total of 564 cars built in the drophead coupe body style between 1937-1939. They add that it has a 1549cc inline-4 engine that produced 54 bhp.

They close the ad by stating that this car represents, “The Most Elegant and Desired of the Three Styles Produced”, and I would agree with that sentiment.

The MG VA Tickford drophead coupe was the most expensive of the MG VA models produced and is a special car. It’s estimated that around 70 of these cars survive today. They are eligible for many classic car events and are rarer than later T series cars.

The pictures show a car that appears to have received an excellent restoration at some point and that has held up. The cost of a restoration on one of these rare cars would likely cost north of $100,000, so this car with an asking price of $60,000 looks like an excellent buy.

The additional fact that the car was formerly owned by Gerry Goguen, founder of MG T series parts specialists Abingdon Spares, enhances my thoughts on the quality of this specific car.

If you are searching for a pre-war coachbuilt British sports car, this MG might be just the car you are looking for.

Sports cars for all tastes offered on AutoHunter auction docket

Video of the Day: British sports car history from 1950s through the ’60s