Pick of the Day: 1965 Chevrolet Biscayne, once owned by Dale Earnhardt Jr.

Featured on an episode of "Ride with Funkmaster Flex" 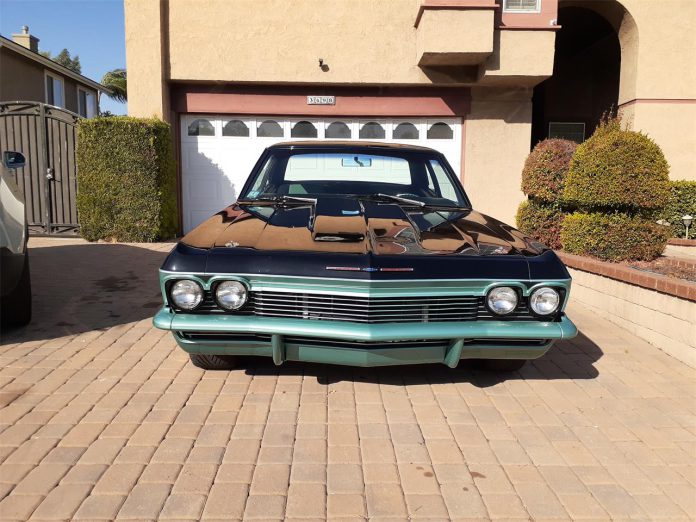 It’s the biggest day on the motorsports calendar with the Monaco Grand Prix, Indianapolis 500, and the Coca-Cola 600 all taking place. Motorsports fans can rejoice with a day filled with racing from dawn to dusk through three different racing disciplines as Formula 1, IndyCar and NASCAR get to show off their wares to Memorial Day Weekend viewers.

With NASCAR closing out the evening with the Coca-Cola 600 at Charlotte Motor Speedway, my daily window shopping on ClassicCars.com led me to a Chevy with NASCAR Hall of Fame pedigree.

The Pick of the Day is this 1965 Chevrolet Biscayne once owned by Dale Earnhardt Jr. for sale on ClassicCars.com by a private seller in Chino Hills, California. (Click the hyperlink to view the listing)

“The car was originally built by Todd Nelson of Land O’ Lakes Florida in 1999 and featured on the cover of the July 2000 Super Chevy magazine,” the listing states. “The car was later acquired by Dale Earnhardt Jr. and subsequently featured in an episode of the TV “Ride with Funkmaster Flex” originally airing in June of 2004 in which Earnhardt Jr. and the host can be seen driving the car during an interview.”

It has a custom two-tone black and turquoise exterior with a cowl induction-style hood, hood pins, and Corvette flag emblems on the fenders. This Chevy has a lowered stance and rides on staggered Torque-Thrust-style wheels, with 245/40 tires up front and 275/35 rear tires.

“The interior features power-adjustable front bucket seats upholstered in black tweed with turquoise tweed insert and black vinyl side,” the listing states. “Custom door panels are fitted to match with machined billet armrests and cranks for side and vent windows. A custom fabricated center console covered in black tweed with simulated carbon-fiber trim panel is mounted between the bucket seats, housing the CD changer, a pair of cupholders, and a storage box.”

Under the hood is a 454ci V8 engine bored .060 over with a Weiand Stealth high-rise intake manifold, Holley 650cfm carburetor, and cast-iron heads with roller rockers. The engine is paired with a 700R4 automatic overdrive transmission with a shift kit and 3,000 rpm stall converter that sends power to a 12-bolt rear with a 4.56:1 posi-traction differential.

The seller is asking $42,500 for the Biscayne and with its former ownership, TV show appearance and custom work it’s a solid deal. Included in the sale is a laminated North Carolina title in Dale Earnhardt Jr’s name with signature, and a copy of the July 2000 issue of Super Chevy magazine.