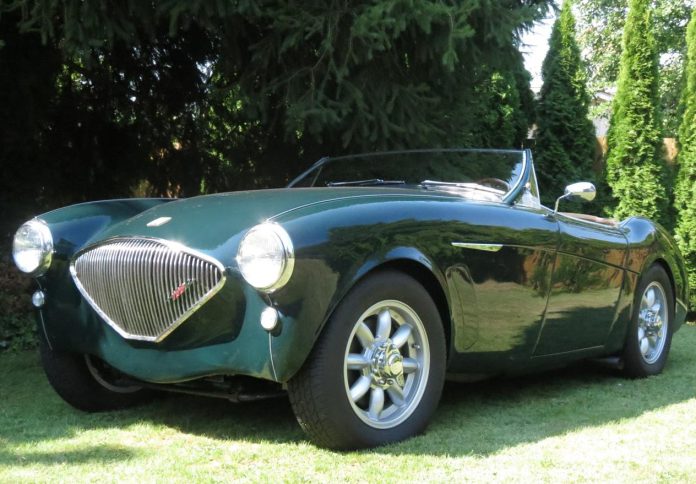 I love rare and interesting British sportscars from the 1950s more than the cars produced in other countries during this era. Cars such as the Aston Martin DBAR1, DB3S, and the Jaguar C and D types have always spoken to me. The problem is that I have never been in a position to buy any of these cars, as the starting point for more than 20 years has been well in excess of a million dollars.

No one was more surprised than I when I saw am interesting car on our site. It was a special Austin-Healey with a one-off body. Even though it’s not wearing the period-correct body this car was developed with the original designer’s input, who designed the production model of this model and the special body as well. The best part is that this car costs a fraction of the price of a special Aston or Jaguar of the period.

The Pick of the day is this 1953 Austin-Healey 100 that’s a professionally restored example of a rare early Warwick-modified competition Austin-Healey. It’s listed for sale on ClassicCars.com by a seller in Bellingham, Washington.

The private party offering this car states that this Healey is of the earliest examples of a Warwick-modified car, which was the template and a predecessor of the much admired “M” series cars. It is car #93, the last of the 1953 BN-100s built and is one of the first to be modified for competition at the Healey works in Warwick.

He adds that it has the many features found on the ‘M’s and a lightened flywheel and drilled backing plates. Besides the competition modifications the car has many pre-production features such as a radiator with a crank hole, and dual mounting holes for the steering box.

It is an early factory-built example of a competition Healey, documented by both a British Motor Industry Heritage Trust Certificate and it’s in the Austin-Healey 100M Le Mans Registry.

Importantly, this 100 is a matching-numbers example. Documentation of the matching body numbers found on the cockpit trim and bonnet are in the photos as well. Additional images of the hand engraved numbers on the carburetor bodies can be seen in the ad.

Yet there’s more. This car is available with both the original factory bodywork and the custom bodywork. At this point the car wears a hand fabricated body that is the original design that Donald Healey approved for production. It is the single Healey 100 ever built to those specifications. This body was carefully recreated here for the first time thanks to input from Gerry Coker, the original designer. Images of Mr. Coker’s emails are included in the ad.

The owner chose to replicate the windshield configuration Dr. George Verrilli used when racing his Healey 100 in the 1955 and 1956 Mille Miglia. It was deemed a historically allowable modification that allows one to drive with a lower windshield without goggles. It features a lightweight removable hardtop with enough headroom for a 6-foor-2 driver and was designed to match the new windshield position. Pictures of Dr. Verrilli’s car are also seen in the ad. All bodywork is bolt on with the custom fabricated pieces utilizing the original bolt holes.

If you are unhappy that this early competition car has been modified fret not. The original matching-numbers unrestored bodywork and ancillary parts, like the bumpers, wire wheels, gear shift knob with o/d switch, steering wheel, and top bows are included with the car should the new owner want to restore the car to its as built condition.

This one-off Healey 100 has an asking price of only $125,000 or best offer, which is a price that could be less than the cost restore and modify the car. It is the single car of its type from the era that I have found that is remotely affordable. If you are interested, I would act fast as I do not think it will last long.