A Chevelle triple feature at AutoHunter 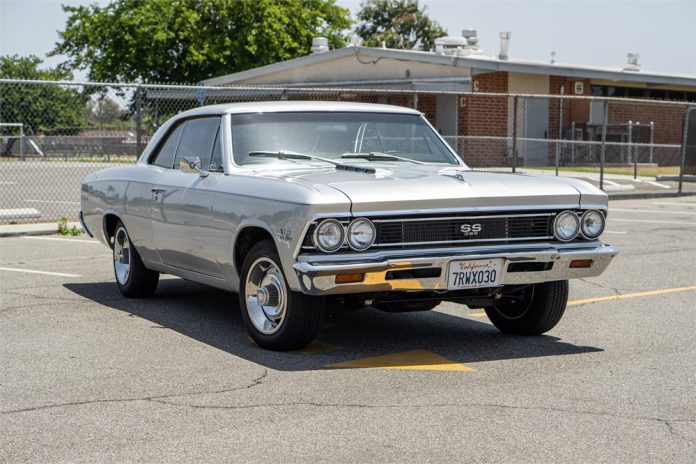 A triple feature of Chevelles caught my eye when I was perusing the docket at AutoHunter. As a Chevelle fan I like the simple notion that during its best years, 1964 to 1972, there was a wide variety of style and aesthetic in the model.

The following triplets are up for auction on AutoHunter and show how the Chevelle went from a largely boxy outline in the first generation to a more rounded off profile in the early 1970s. Despite the change in style, it always remained a muscle car at its core.

1964 was the first year of the Chevelle and this example has plenty of power under the hood with a 396ci V8 engine that features headers, HEI ignition, and an aluminum intake. The engine is paired with a three-speed automatic transmission.

This metallic crimson convertible with a black vinyl top is a proper droptop cruiser for the upcoming summer months. The interior has gray and red tweed front and rear bench seats, red floor carpeting and a steel dashboard in metallic crimson.

Simply put, it’s a good cruiser for the upcoming warmer months and has enough horsepower with its 396 to maintain a sleeper vibe.

Just two years removed from its debut and the Chevelle is a different car with a stronger stance, longer profile, and a few curves. This SS tribute is more performance based than the previous Chevelle in the triple feature but is also shows the diversity of uses for the A-body platform.

It’s powered by a small-block 350ci V8 that’s been bored .030 over and features an Edelbrock carburetor and choke, and 21-circuit Painless Wiring insulated wiring. The engine is paired with a 700R4 4-speed automatic transmission.

Finished in metallic silver it has SS branding, extensive chrome brightwork and quad headlights. The interior has the same color scheme as the Las Vegas Raiders with two-tone silver vinyl and black cloth front bucket seats and a matching rear bench seat. The Raider Nation is on the rise with a playoff berth last season and this Chevelle is perfect for the Las Vegas Strip.

My favorite year for the Chevelle and this one has aggressive style with a supercharger busting through the hood. This black-on-black muscle car has 10-spoke silver and black aluminum wheels. The overall vibe of this Chevelle is akin to Darth Vader.

It’s powered by a 383ci small-block V8 engine topped by a Weiand supercharger with dual quad Holley Double Pumper carburetors. The power plant has an aluminum intake, full-length tube headers, an MSD ignition system and is dressed up with chrome Moroso valve covers, and an aluminum radiator. A Super T-10 4-speed manual transmission sends power to the rear wheels through a 12-bolt solid axle.

Definitely built for speed with a supercharged engine and a four-speed.