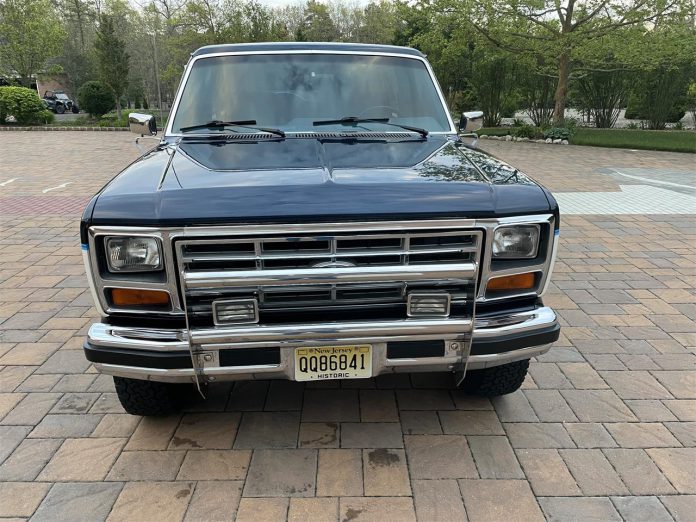 With the latest Ford Bronco making waves in the sport-utility marketplace, renewed interest is directed toward clean older examples. Engineering has come a long way in the last couple of decades: the new 2022 Bronco Raptor boasts a potent 400-horsepower 3.0-liter EcoBoost V6, 37-inch tires, and a Fox-tuned adaptive suspension.

But for some people, the original Bronco is a machine that won’t be soon forgotten.

The Pick of the Day is a low-mileage 1985 Ford Bronco XLT 4×4 listed for sale on ClassicCars.com by a private seller in West Creek, New Jersey. (Click the hyperlink to view the listing)

“This is truly an awesome 1985 four-wheel drive Ford Bronco XLT,” the listing begins. “Bought in 1985 by family and has been here ever since.”

This is no 400-horsepower beast, but its fuel-injected 302cid Windsor V8 churned out 150 horsepower in its day which was respectable for the time. The odometer shows just 60,154 miles, and unlike most off-road vehicles from its era, this Bronco has survived in miraculously showroom shape all these decades later.

Since 1966, the Bronco name has been a household staple when it comes to discussing full-size American sport-utility vehicles. When the model evolved into its third-generation body style beginning in 1980, it was based upon the F-Series pickup with a characteristic “Bullnose” front end. Off-road chops were substantial and included a Dana 44 front axle, a leaf-sprung Ford 9-inch rear axle, auto-locking hubs, and a transfer case skid plate.

From the looks of things, this well-preserved Bronco hasn’t seen any Moab trails. The two-tone blue and white body appears straight and rust-free, and the blue cloth interior with captain’s chairs is equally impressive. Aside from a chrome front bumper guard and a set of 15-inch American Racing cast aluminum wheels wrapped in 31-inch BFGoodrich tires, this Bronco is about as original as they get. The seller states “Runs perfect. It has never been lifted or messed with.”

For the 25-years span between 1996 and 2021, the Bronco disappeared from Ford showrooms, but it’s back — and the new model is even being manufactured at the same assembly plant in Wayne, Michigan. Some people – including the seller – still prefer the old-school examples. “The real deal, not like these new ones that just came out!” the listing states.

The seller is asking $34,500 or best offer for this clean vintage Bronco.