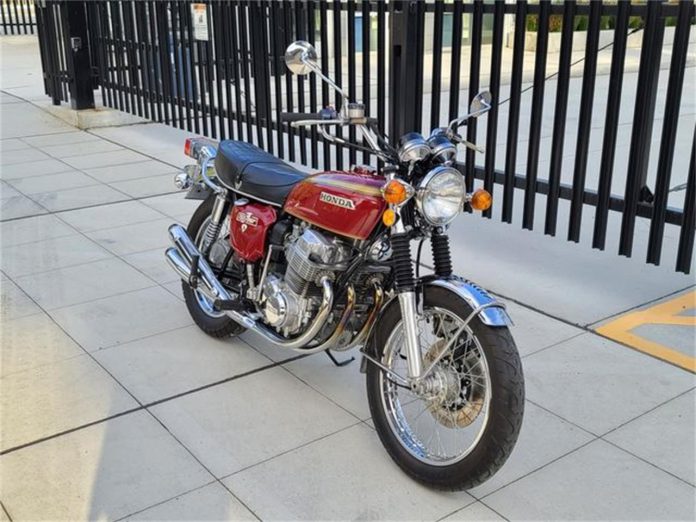 My last Pick of the Day was the bike that in many ways was the end of the era for British motorcycles, the 1969 Triumph Bonneville T120R. The reason for this being the end of an era was because of a new bike that was introduced the same year from at the time an unlikely country, Japan.

That bike was the CB750 Four. The Honda CB750 was an absolute game changer. It had a 750cc SOHC inline-4 engine that offered the strongest performance offered on a street going motorcycle combined with incredible build quality, especially when compared to bikes from Triumph and BSA.

It also offered a front disk brake, as opposed to the usual drum brakes seen on British bikes of the time. Surprisingly Honda was able to offer this high-tech marvel for only $1,495 when a 1969 Triumph Bonneville would cost you more. Did I mention that the CB750 also had reliable electric starter?

The Seattle, Washington dealer offering this bike on ClassicCars.com states that this CB750 has only covered 13,000 miles from new. They go on to tell us that this bike was purchased in May of 2005 from Mr. Thomas Arnone, a specialist in restoring vintage Hondas based in Kalispell, Montana.

They affirm that this bike has been stored indoors almost every day since it was new. Arnone replaced the original tank with a new one, and installed new aftermarket side covers. The new parts were painted a correct 1972 Honda CB750 factory color of Candy Ruby Red. They add that the instruments still retain the original sun-cracked faces, original exhaust pipes in excellent condition with new baffles installed. The saddle is original with no rips or cracks and this bike includes its original tool kit and owner’s manual.

The CB750 is getting more expensive, with first year examples selling for more than $30,000. This one being a later model is being offered at what I call a fair price of $13,972. If you remove the last digit it almost equals the price it cost new.

The CB750 is not likely to drop in price due to its history and how easy they are to own and are getting harder and harder to find this nice.