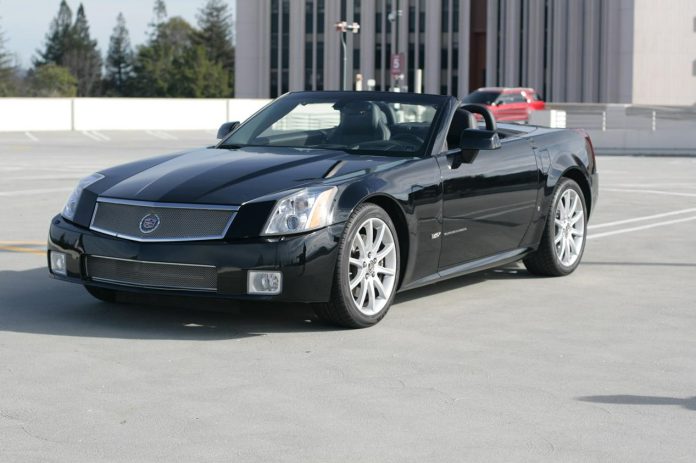 Many people think of Cadillac as a brand affiliated with four-door sedans offering pillowtop bench seats, heavily cushioned suspensions, and a plush interstate driving demeanor. But one car turned that stereotype in the opposite direction when it was launched 18 years ago.

The Pick of the Day is a 2006 Cadillac XLR-V roadster listed for sale on ClassicCars.com by a private seller in San Jose, California. (Click the link to view the listing)

“Rare 2006 Cadillac XLR-V in private collection for 14 years,” the listing begins. “Only 399 made in Raven Black with Black interior for 2006 and only 2,188 total XLR-Vs produced in a four-year production run.”

Perhaps the most compelling feature of this roadster is its odometer reading, which shows only 7,871 miles.

The XLR first came to market in 2004 as a two-seat roadster with a retractable hardtop. While it was built on the same assembly line in Bowling Green, Kentucky as the Corvette and shared the same Y-body hydroformed perimeter frame, the XLR did not get a Corvette motor. Instead, it featured Cadillac’s 4.6-liter Northstar V8. A high-performance variant dubbed the XLR-V was later offered with a 4.4-liter supercharged V8 that cranked out 443 horsepower and 414 lb-ft of torque. The only available transmission for the XLR-V was a six-speed automatic.

Equally important as the engine in any performance car’s pedigree are its suspension and braking elements. The XLR-V uses Magnetic Ride Control for max stability and braking comes via four-wheel disc brakes with cross-drilled rotors. And where the XLR-V excels over its Corvette sibling is in delivering creature comforts: despite being a performance car at heart, its cabin offers a nine-speaker Bose audio system, touch-screen navigation, dual-zone automatic climate control, a head-up display, and leather seating.

All those amenities come with a price, and the XLR carried a hefty tag when it was new, coming in at around $100,000.

This Raven Black XLR-V has accrued on average fewer than 500 miles per year for 18 years, having been garage-kept long-term. According to the photos in the listing, it looks the part. “In mint condition. Never in the rain or inclement weather. Never left outdoors, stored in garage at all times,” the seller states. “The leather inside this car still smells like brand new.”