A Cadillac to take care of psychic business 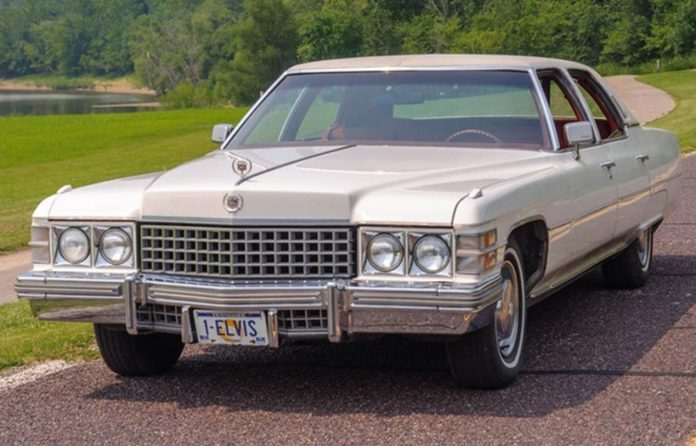 I have a “TCB” tattoo on my right arm as a proper homage to Elvis Presley, because I’m a longtime fan and do my best to take care of business. I don’t emulate Elvis a lot, beyond a poor diet, but I like his devotion to Cadillacs.

I’m pretty pragmatic in my existence, and as such I don’t believe in clairvoyance, but I like the vibe this Fleetwood is throwing my way.

The Pick of the Day is a 1974 Cadillac Fleetwood d’Elegance Brougham purported to once being owned by Elvis Presley’s psychic. It’s available for sale on ClassicCars.com by a dealer in St. Louis, Missouri. (Click the link to view the listing)

“Ever wanted to own a car the King of Rock ‘n Roll spent some time riding in? Now’s your chance with this 1974 Cadillac Fleetwood d’Elegance Brougham. Elvis reportedly bought the car and gifted it to his personal psychic, Ms. Lou Wright,” the listing states.

The exterior is finished in Cotillion White (code 11) with a white cross-grained padded roof (code J), and the dealer describes the bodywork as straight, while the car’s paint and trim is in very good condition. It has a Dark Terra Cotta Medici Picque cloth interior (code 148) with the front and rear bench seats described as being in “very good overall shape”.

“This example is one of 18,250 copies made in 1974 and was assembled in General Motors’ Detroit, Michigan factory (VIN code Q) during the first week of April and delivered to Balmer Cadillac in Bay Ridge, Brooklyn, New York,” the listing states. “Later, the car was carefully maintained at the Celebrity Car Museum in Branson, Missouri.”

Under the hood is a 472ci V8 engine paired with a column-shifted Turbo Hydramatic 400 three-speed automatic transmission and 2.93:1 gearing. Current mileage on the odometer indicates 97,260 miles and the car has a mileage exempt title.

This Cadillac can be had for $21,900. I don’t have a psychic in my life, but maybe I should get one after thinking my beloved Phoenix Suns would win the NBA championship this season.