Originally owned by the United States Department of Agriculture 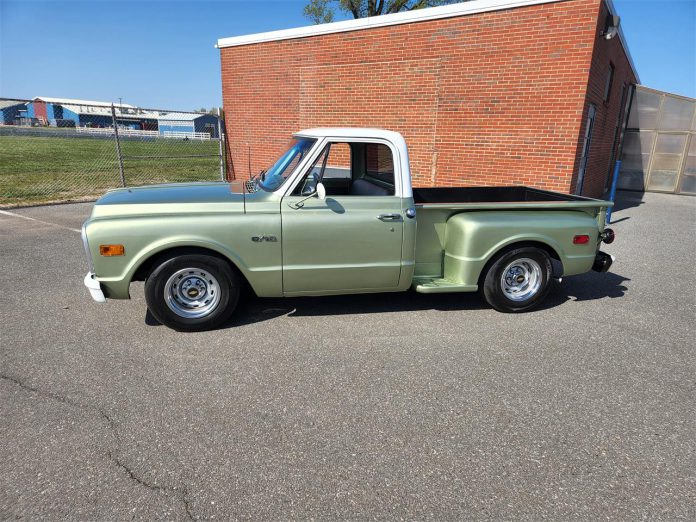 It’s appropriate that a pickup originally owned by the United States Department of Agriculture would have a nature-themed color scheme, and this second-generation C/K-Series is no exception.

The Pick of the Day is a 1969 Chevrolet C10 stepside pickup listed for sale on ClassicCars.com by a private seller in Harrington, Delaware.  (Click the link to view the listing) Finished in a vivid Kiwi Green Metallic, this restored C10 is the product of a recent two-and-a-half-year restoration effort.

“I spent tons of hours bringing it back to its classic look,” the listing states. “The rear fenders were replaced with original rust-free units and side steps.” A set of Rally wheels completes the look.

Dubbed the “Action Line,” the second-generation C/K-Series pickups were introduced to the marketplace in 1967. Chevrolet sought to position this truck as a multi-purpose vehicle as opposed to strictly a workhorse, and enhancements were made to conveniences and comfort with that in mind. A handful of stylistic changes were carried out in the years that followed, including the addition of side marker lights in 1968. A year later in 1969, the hood was revised with a blunter leading edge, a new grille was added, and bodyside moldings allowed for two-tone paint schemes.

Speaking of paint schemes, a custom Kiwi Green Metallic was the hue of choice for this restoration recipient. The Protect-O-Plate that accompanies this C10 stepside shows that it was originally issued to the Soil Conservation Service of the U.S. Department of Agriculture in Virginia. While additional details about the nature of the tasks this truck carried out are limited, a handwritten maintenance log on the back of the owner’s manual shows that its original owner was mindful of service and care.

Restoration results extend to the inside of the cabin where the truck received new black leather upholstery, a custom center console, new carpeting, and a modern audio system with 6×9 speakers.

The seller notes that this pickup could make a worthy candidate for a V8 LS swap, but it’s a fun driver as-is. “I really like it the way it is and didn’t have a reason to remove the original motor,” the listing states.

The seller is asking $27,000 or best offer for this nicely refurbished, former government-owned pickup.