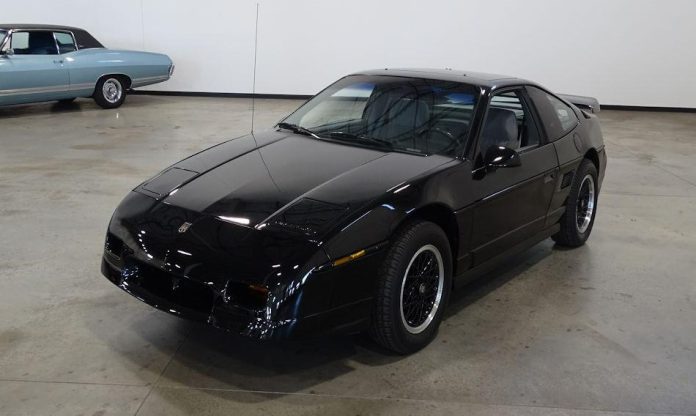 Mid-engine cars are usually exciting, exotic, and expensive. They come from brands with names like Ferrari, Lamborghini, Maserati, and DeTomaso. In addition, these cars are all expensive to service and not without their issues due to their low-build numbers.

In the 1980s Pontiac introduced an affordable mid-engine car, the Fiero. It initially saw some strong reviews but soon afterwards became plagued with quality control issues, as well as having an anemic 4-cylinder engine in the form of the anemic Iron Duke.

A few years later though, these issues were attended to with the introduction of the Fiero GT. The GT was powered by 2.8-liter V6 and saw needed changes to the body, suspension, and interior. The Fiero GT was a great car, especially in its final year of 1988, but it was just too little too late, and the only American mid-engine sports car was gone.

The Pick of the Day is this black over gray 1988 Pontiac Fiero GT that has covered a total of only 33,000 miles from new. It’s being offered for sale on ClassicCars.com by a dealer in O’Fallon, Illinois.

The Fiero, in all its guises, is a fan favorite at every RadWood event. The last generation Fieros are truly a great sports car and in many ways show what could have been. The asking price for this car is a market correct $26,000, which looks like a good value for an immaculate original car with mileage this low.