Help us reunite a man with his missing car 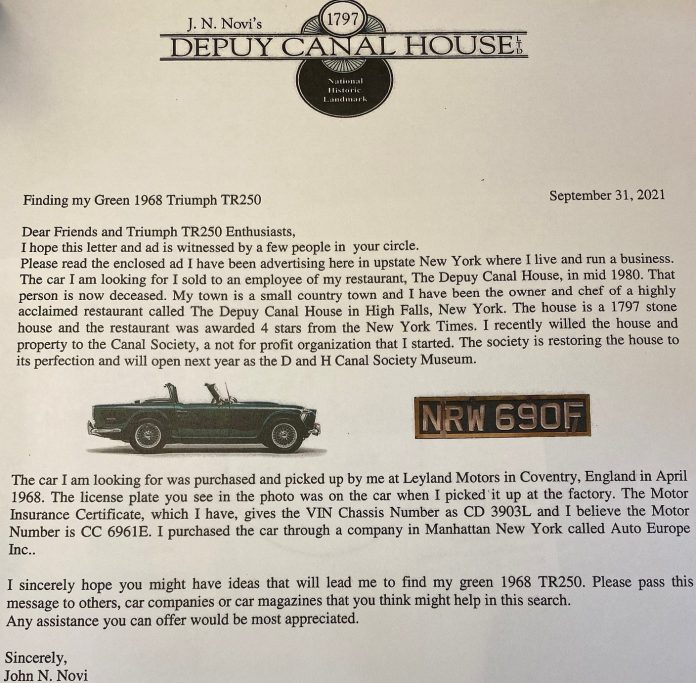 We received an email last month, there wasn’t text, just a picture of a document from J.N. Novi’s Depuy Canal House. In many aspects it was a missing poster, but the subject was a lost 1968 Triumph TR250.

John Novi, like a lot of us, just wants his old car back. The 1968 Triumph TR250 was his since day one. He ordered it new, picked it up from the factory and toured Europe during his early days as a burgeoning chef and restauranteur.

“I bought the car from Auto Europe out of Manhattan in 1967 and picked the car up in 1968 at the factory,” Novi said. “I traveled down to Italy where I went to work at four different hotels. I drove the car from Italy. I was working in Sorento and my family had the farm in a town about 40 minutes north of Sorento, so that’s where I lived. I worked on the farm, too. I then drove up to Le Havre, France, and I got aboard the SS United States. It arrived in New Jersey port two weeks after I arrived.”

His 1968 Triumph TR250 is finished in green with motor number CC 3961E, and chassis number CD 3903L. It was originally purchased at Auto Europe Inc. of Manhattan, New York and was picked up at Leyland Motors in Coventry, England.  According to shipping documents it was expected to arrive in New Jersey around August 15, 1968.

John maintained the Triumph, driving it during the summer and storing it in a barn during the winter. But sometimes financial circumstances can lead to making difficult choices and in the early 1980s John was forced to sell the car to one of his employees. John told the buyer he would buy the car back when was financially solvent.

He is still waiting for the opportunity to buy it back or find it. His contact efforts to the former employee have been futile, no response from him or his daughter.

“That was about a year and a half ago,” John said about his recent contact attempts. “I’ve sent her registered mail. I’ve sent her dad registered mail, but nothing came through, and it’s just bewildering that she won’t give that little bit of information. Even if the car was junked, I want to know where it is.”

We can relate to John’s reasons for wanting to find his Triumph TR250. A car can be a legacy and a treasured item to pass on to the next generation, a beloved memento that we want to share with those we care about the most.

“My son is now old enough, or he has been old enough, I had promised the car to him when he would become 25, and he’s now 46,” John said. “He would love the car, and he would love to restore it if it needs restoration, but I’d like to fulfill that part of… Plus, I would love to drive it myself.”