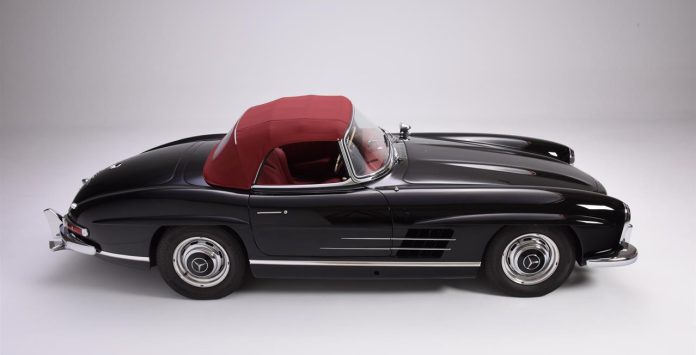 If you are shopping for a top tier European collector car that you can actually use on things such as events and rallies and want something that also offers reliability, there aren’t many choices out there. Now when I say top tier collector car I am talking about a true blue chip car; a car that is suited for a rally, as it appropriate for a concours lawn. Try to think of cars that cost more than 1 million dollars and seem to be stable due to what they represent to collectors.

Of all the ‘blue chip’ classic European cars available that offer the varied event eligibility and reliability, as well as historically stable values, the single car model I can think of is the Mercedes- Benz 300SL.

The 300SL is a car that can really do everything, a classic car ‘Swiss Army Knife’ of sorts. They are exceptionally well built, reliable, fun to drive, and absolutely stunning to look at.

There have been many books written about the 300SL, so in brief the car was a direct descendant of the Mercedes-Benz W194 racing car. American importer Max Hoffman proposed the idea of a Mercedes street legal grand prix car for enthusiast buyers. This car was the 300SL and it was introduced in February 1954 at the New York International Auto Show. The car was well received, and Mercedes began production of the 300SL in August of the same year.

The Pick of the Day is one of these legendary cars, a 1961 Mercedes-Benz 300SL Roadster listed on ClassicCars.com offered by a seller in Portsmouth, Rhode Island.

The seller describes this 300SL as a car that includes all original documentation, previous owner history, service history, and restoration history.

The photos in the ad show what looks to be a nice 1961 300SL roadster finished in black with a red leather interior. The photos show great details about the car and they appear to be correct.

I have driven a number of 300SL cars over the years, but sadly never owned one. I’m simply not in the tax bracket to spend more than a million dollars on a car. I will say that if I was, a 300SL roadster like this one would be the first high-end collector car I would buy.

On the road these cars are simply amazing. It is a car designed in the 1950s that feels like one designed in the late 1960s. It’s better than porting roadsters by other company during the same period, and I say this because I have driven numerous high-end roadster from the era.

A 300SL roadster is capable of 0-60 mph times of 7 seconds, ¼ mile times at 15 seconds flat, and a top speed, depending on how the specific car is geared, as high as 163 mph. Consider other cars from the period and you will not find one with those stats. Also consider the comfort of the excellent seats, the great ergonomics of the control layout, and the fact that a 1961 300SL is fuel injected and received disk brakes that year.

These cars also handle well. The engineers at Mercedes, when the 300SL was new, felt that the handling on the roadsters is better than the gullwing coupe due to the improved rear end geometry. According to legend, the engineers asked Mercedes for permission to use the improved rear in the gullwing but were told no, as the company still had 300 of the older design they needed to use.

The market for these cars rarely really drops down and in the last year the 300SL has grown more popular with higher realized prices. This has a lot to do with the usability of these cars compared to any other car of the period. These cars are meant to be driven and due to the advanced technology of them makes this not a chore, but a joy.