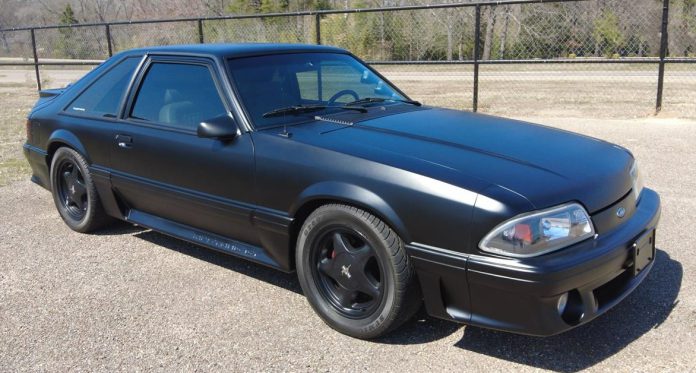 A few years ago, my dad asked me if the collector car industry would survive. I had a simple response, “A lot of teenagers became obsessed with a car when they were in high school. Eventually those kids get jobs and can afford something they once dreamed of. If that cycle continues there will be a classic car industry.”

I don’t think I was that articulate when I replied, but that was the gist of it.

Nostalgia is a strong drug. You forget the bummer parts of yesterday and focus on the cool stuff. For example, I now look back at my high school years as a fun experience, but it was an awkward existence with a lot of self-doubt and some bad haircut choices.

As a burgeoning car guy in my teenage years, I fell in love with the Mustang GT. This wasn’t based on Vanilla Ice lyrics; it was a sharp looking car, had more flavor than a Camaro or Firebird, and had a cool exhaust note. The harsh reality was that I could never afford one in high school as my limited income was based on working as a stock boy at Marshalls.

But my reality has changed and if I didn’t already have a hobby car in my garage an early 90s Mustang GT would be on the horizon.

The Pick of the Day is a 1993 Ford Mustang GT (click on the link to see the ad) being advertised for sale on ClassicCars.com by a dealer in Longview, Texas.

“This Fox Body has had extensive restoration work and some very cool upgrades. All completed in 2016,” the listing on ClassicCars.com states. “It has been in the same family since 2004, no one could bare to part with it. The engine was rebuilt by the owner, Thomas William Ryan III, former SAE International President, who specialized in engines, fuels and combustion technology.”

A stock 1993 Mustang GT produced 205 bhp from its 5.0-liter V8 engine, not a lot of horsepower but it was solid for the era. This Mustang’s engine is upgraded with a Vortec Supercharger, a Holley SysteMax intake, and an MDS 6-BTM Ignition Box. The engine is paired with a five-speed manual transmission.

The exterior has been customized with a flat black paint job that matches the black five-spoke wheels with Mustang center caps.

Sleek and stealthy with the flat black exterior, this Mustang GT is available for $27,775. As more 90s teenagers want the unobtainable car of their youth the collector car industry will keep on keepin’ on and values with increase for this muscle car.