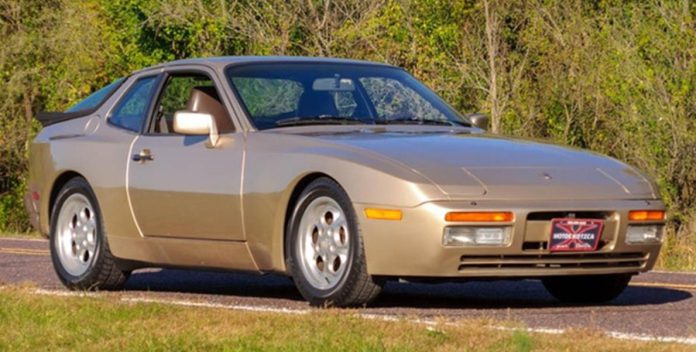 The name Porsche and the word turbo have become synonymous to people as the top of the heap for cars coming from the Stuttgart-based company. It all started when Porsche released their first turbocharged production car in 1975, the 911 Turbo Carrera. Finally, there was a supercar from Porsche, and it became an icon for the exotic cars of the era, with posters of the car adorning countless teenager’s bedroom walls. As a result, these cars continue to increase in value on a seemingly daily basis. As of this writing a top tier Porsche 930 car cost north of $200,000.

That being said, there was another Porsche with the name ‘turbo” they introduced in 1985 and it was the 944 turbo. What Porsche did was take the standard 944 and not just add a turbo to the equation, but also modify the suspension and bodywork, to build a car that at the time was just about as fast (some say faster) than the 911 turbo and offer it for a lower price.

Car reviews of the era raved about the 944 turbo and were stunned by the performance the car offered for the price. They also commented about the turbo lag, also present in the 930, as the turbo really does not kick in until around 4,000 rpm, at which point you seem to get all the boost at once. While some do not like the feeling, I personally love it as it makes the 944 turbo feel like a kind of automotive rollercoaster.

The performance for the era was supercar like with 0-60 mph coming in 6 seconds flat and the car had a great top speed for the era at 155 MPH. In addition, the 944 turbo is a supremely comfortable and a perfectly balanced sports car with great air conditioning and all the creature comforts available during the 1980s.

The Pick of the Day is one of these cars, a 1986 Porsche 944 Turbo finished in Kalahari Beige listed for sale on ClassicCars.com by a dealer in St. Louis, Missouri.

The seller describes the paint and trim as being in overall very good condition. They add that the body is straight and solid, the body-colored bumpers fit tightly to the rest of the body and the engine bay and cargo area are very tidy.

They also state that the factory original chocolate leather interior is in very good shape and the carpet is also in good condition.  The only interior change looks to be the addition of a Kenwood AM/FM stereo with cassette deck.

The car rides on factory ‘phone dial’ alloy wheels and the photos of this car show a car that looks like a well-preserved, largely original example, backing up the claim of the car only covering 81,000 miles from new.

The few things I would inquire about are to ask for the service history of this car and see when the clutch and timing belt were last replaced. Because I am a picker of nits, find out how the aftermarket turbo rear reflector was installed. Many were glued on, and these were not a factory option, and I like things to be exactly the way they were when new. Sure, these reflectors were added to probably 50% of these cars in the period, but I personally prefer the cars without this add on.

The best part I have saved for last. This 1986 Porsche 944 Turbo is being offered for only $29,500 which represents a very fair price on a car that like its older brother the 930, continues to increase in price.

So, if you want a Porsche turbo that is less expensive than the 911 version, as well as being more civilized, yet offers about the same levels of performance, you might want to seriously consider adding this car to your collection.