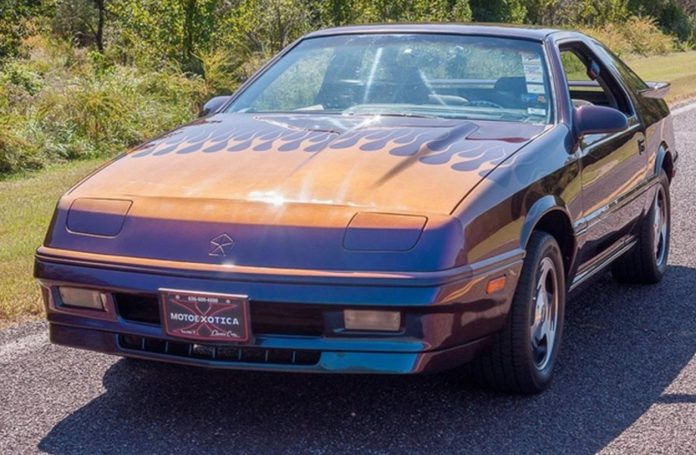 Mopar lovers in the 1980s didn’t have a lot of options if they wanted to go fast. The bygone era of rear-wheel drive V8 muscle cars was long gone for Dodge, and Chrysler didn’t release a proper sports car until the Viper in 1991. Dodge didn’t produce a car in the same vein as the Ford Mustang, Chevrolet Camaro, or Pontiac Firebird during the Reagan administration, as such Mopar consumers needed to go a different route for a performance vehicle.

The Pick of the Day is a custom 1987 Dodge Daytona Shelby Turbo Z available for sale on ClassicCars.com by a dealer in St. Louis, Missouri.  (Click the link to view the listing)

“Dodge marketed the Daytona as a front-wheel drive alternative to such rear-wheel drive stalwarts as the Camaro, Mustang and Firebird, touting its turbocharged four-cylinder as a better alternative to their larger V-8 motors while delivering more miles per gallon yet providing almost as much power in a lighter package,” the listing states.

Under the hood is a turbo charged and intercooled 2.2-liter 4-cyliner engine with multiport fuel injection that produced a factory-rated 174 bhp and 200 foot-pounds of torque when new. Not blistering fast by today’s standards with 0-60 mph jaunt in the 7.5-second range. The engine is paired with a five-speed manual transmission (code A555) with Getrag gears.

“This example is one of 7,152 Daytona Turbo Z models made in 1987 and was built on May 7, 1987 at Chrysler’s Fenton, Missouri assembly plant, which was located a couple of miles from the showroom,” the listing states on ClassicCars.com. “This is a one family owned car with 96,584 original miles and is sold on actual mileage Missouri title.”

It’s not an American muscle car, but more of a hot hatchback with low original miles, and if one is inclined the asking price is $8,900.