A coupe from a time warp 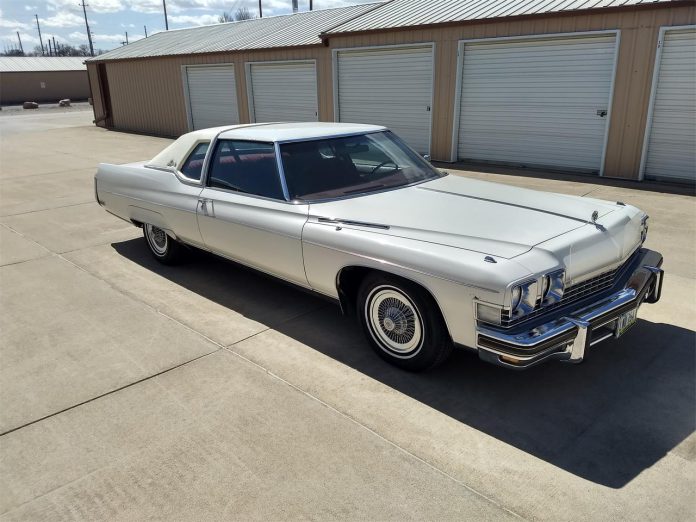 “Let’s do the time warp,” begins the listing for a nearly 50-year-old car that recently landed on the ClassicCars.com marketplace.

Time travel takes us to the year 1974, when the world was going through the aftermath of an oil crisis, Richard Nixon was resigning as U.S. president following the Watergate scandal, “Blazing Saddles” took over the film box office, and the world population hovered around four billion people.

Sitting on the showroom of an Iowa Buick dealership that year was the Pick of the Day: a 1974 Buick Electra 225 listed for sale on ClassicCars.com by a private seller in Denison, Iowa.  (Click the link to view the listing)

“This fabulous 1974 Buick Electra 225 Limited coupe is a one-owner and garage-kept treasure,” the listing states. “Everything is in original factory condition with no attempted restorations. The interior is in mint condition and still smells new!” The car’s original owner was the seller’s father who has since passed away, and the family is seeking a worthy caretaker for this family heirloom.

Originally named for its overall length of 225 inches when it launched in 1959, the Electra 225 was introduced to the market as a successor to the Roadmaster and came in body styles including a convertible and a four-door hardtop. The Electra occupied the top of the Buick model hierarchy throughout its lifespan and persisted through 1990 in a variety of generations, body styles, and trims.

When the fourth generation launched in 1971, it was given an entirely restyled body on the General Motors C-body platform, and the first three model years of the generation saw only four-door hardtop Electra 225s. In 1974, a pillared coupe and a convertible came to market. Styling evolution that year brought a revision to the egg-crate grille along with revised lighting systems and federally mandated 5-mph bumpers.

Speaking of bumpers, the one very visible cosmetic flaw on this surviving example is its bumper inserts which have deteriorated over time. The seller states that replacement parts are available. Mechanically, the car is sorted and benefits from routine maintenance and fresh tires. Under the hood of this 231” resides a 455cid V8 sending power to the rear wheels through a 3-speed TH400 automatic transmission.

The seller is asking $19,800 or best offer for this well-preserved family heirloom.  “Price is negotiable,” the listing states.  “A good home for dad’s baby is not.”