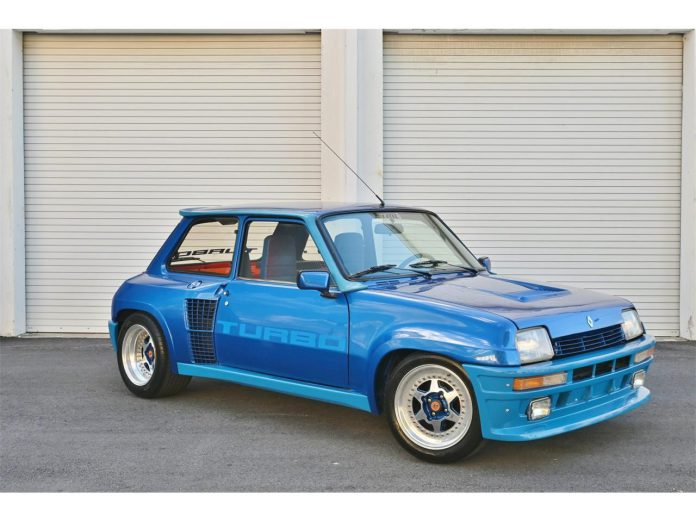 I attended high school in the 1980s and when I was in my teens my very favorite car magazine were the Road & Track special Exotic Cars issues. These magazines introduced me to cars that were in the United States but were rarely seen, especially growing up in Tucson, Arizona. Either they were so expensive that few were sold in the U.S. or they were not legal here without going through the Grey Market importation scheme.

Each issue would introduce me to more and more of the coolest cars on the planet like the Lamborghini Countach, the Ferrari 512 Boxer, and our Pick of the Day is this 1981 Renault R5 Turbo.

This specific car is available on ClassicCars.com by a dealer in Miami, Florida. The exterior is painted in Olympe Bleu over a Olympe Bleu interior with Grenade carpeting; a combination that just screams 1980s.

The whole car shouts “look at me” from the inside and out. From its crazy fender flares, one of the wildest seat designs I have ever seen, and what has to be the most interesting steering wheel in any car of the era. Those features make the Renault Turbo the perfect car for living out those Miami Vice fantasies that some of us have.

The seller states that this R5 Turbo has a recently restored fuel tank, a completely rebuilt engine, and the addition of electronic fuel injection. The car’s paint is said to be original, as is the interior. In addition, this car comes equipped with 1980s-period Gotti wheels, and the stock wheels.

The Renault Turbo is a bit of a mad scientist’s idea in the realm of auto engineering and design. Gandini and the Renault engineering team must have been drinking one night when they decided to take the 55 horsepower Renault 5 economy car, the same car sold in the U.S. as the Le Car, and turn it into a mid-engine fender flared monster. The actual reason that the R5 Turbo was created is that the car was designed for rallying and they had to build a street version for homologation, and I am so happy they did.

Period tests of the car saw 0-60 times of around 6 seconds, which may not seem fast today. In 1981 it was faster than any Ferrari in production at the time.

These cars draw attention wherever they go, and the details of these early cars make them all the more special to me. If you want to buy a car that will win at Radwood, this is it.

The asking price of this Renault Turbo is a market correct $145,000 and I honestly don’t see these cars dropping in price in the future.

Cars With Stories: A Visit to a Kentucky Auto Museum