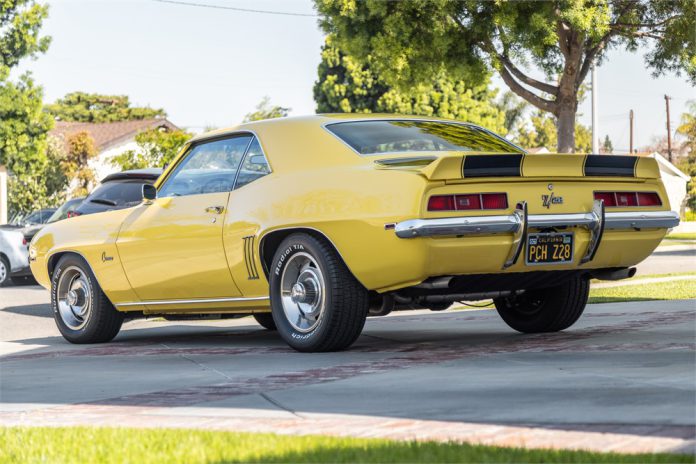 Rolling in a unique car is not for everyone. But if you’re in the market for something to stand out from the crowd, check out these selections from AutoHunter, the online auction site driven by ClassicCars.com.

Chevy entered the Pony Car market with the 1967 Camaro and the Z/28 was meant for the SCCA Trans-Am Series. This example received a frame-off restoration, and its pedigree is documented with the original Protect-O-Plate.

Reminiscent of a bumble bee, not the Bumble Bee from The Transfomers which was a 1977 Camaro, it has all the proper enhancements for speed with a Turbo-Fire 302ci V8 engine paired with a Muncie 4-speed manual transmission.

I’ve always had a soft place in my heart for the Z. Stylish, sporty and often affordable, but they are trending up in value and nostalgic fondness. With the latest incarnation of the Nissan Z on the horizon, which is available with a standard transmission per Brie Larson in the advertisements, it’s a good time to remind us of the grand daddy of them all.

This Datsun 240Z was repainted silver and features a black interior. While not necessarily a brash combo, it’s lengthy hood and low ride height make it stand out from the crowd of modern cookie cutter offerings.

Under the hood is an L24 2.4-liter inline-6 engine with a rebuilt cylinder head, and a trio of Weber carburetors. The engine is paired with a four-speed manual transmission, and I’ll assume Captain Marvel would approve of that.

Completely restored and powered by a rebuilt 289ci V8 engine, this Comet will invoke a double take for those that think you’re driving its sibling, the Ford Comet or maybe even a Galaxie.

The exterior is refinished in Jamaican Yellow over an interior with reupholstered tan and vinyl front and rear bench seats. If you want a unique car for your collection this Mercury is a good way to go, but you may encounter a younger generation that may have never heard of the brand.

View your purchase as a possible teaching opportunity at car shows or gas stations. It’s always good thing to teach the next generation of car lovers about former car makers.

A “Highboy” 4×4 F100 repainted in red is not subtle, but sometimes it nice to stick out in a crowd.

It’s a high-rise Ford with a customized lifted suspension and Mickey Thompson tires. Powered by a 360ci V8 engine it sends power to all four wheels via a transfer case and an aftermarket 4-speed manual transmission.

This is just a small sample of the cars available on AutoHunter, and many of the offerings are a little more subtle.