What, you don’t remember the Caballo XL? 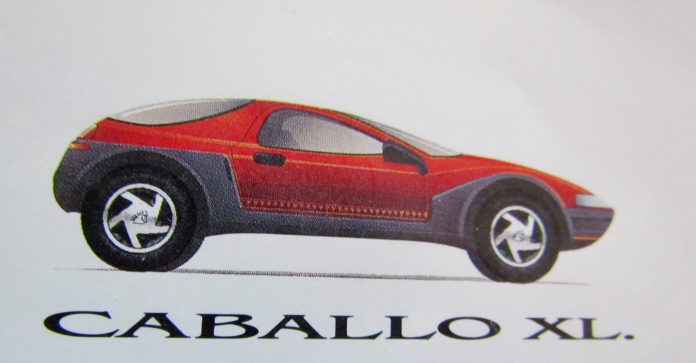 And the car certainly looked sporty enough, a sleek, red two-door coupe with a bulging and large backlight, and a stance that hinted that this car might indeed have 4-wheel drive.

“In a land where few roads are paved, and speed is a national passion, four-wheel drive could only be a beginning,” we were informed.

“Speed had to be sacrificed to maintain even a semblance of control,” we were told. “But life in the land of the gauchos without the exhilaration of exceeding 160 km/h on a regular bases was becoming simply unacceptable.”

Quick do the math, and it added up to a car that could conquer unpaved terrain at 100 mph.

At this point you need to know the proclamation of the new Caballo XL was issued in 1990, and the key, we were told, was “the evolution of the fifth wheel — the steering wheel.

“You don’t step into a Caballo XL. You put it on.”

Through “a unique shock absorbing system to the entire steering command,” steering wheel, shaft, even the driver’s seat, were isolated from the bone-shattering vibration that might rob you of control.”

If you’ve read this far, you probably think all of the above is the Journal’s annual attempt at an April Fools’ Day prank.  And it is, but only sort of.

Actually, it was part prank, part publicity stunt for an advertising agency based on Buenos Aires, Argentina, hoping to show its capabilities to the world’s automakers. I recently was going through a pile of calendars, posters and assorted documents that moved with me from Michigan to the desert southwest. Among that stack were the three Caballo XL magazine spreads that agency had sent to assorted American auto writers back in 1990.

What the Caballo XL promised has since become reality in vehicles such as the Ford Raptor and its ilk. In that regard, the agency was predicting what was to come: “An onboard computer that translates road information so quickly and accurately, it can automatically compensate for the irregularities of the road faster than you can. The result is unsurpassed clarity of command.”

For the record, the agency said the 5WD sports car had a 228-horsepower straight-6 engine and rode on special Nokia Hakkapelitta tires.

“Test drive a Caballo XL on a rocky road near you,” we were told. “But please never close your eyes. You might think you’re flying.”