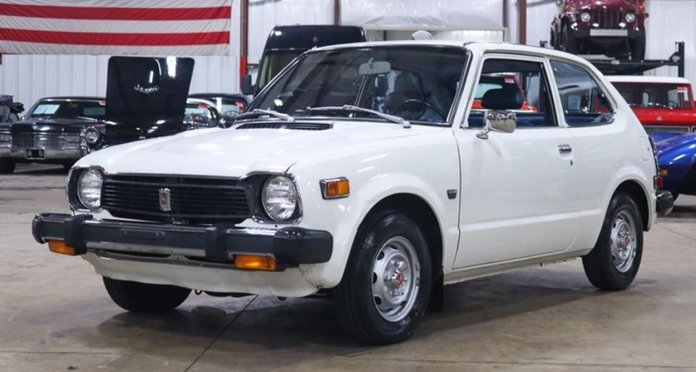 Gas prices are creeping up. The cost of the daily commute isn’t getting cheaper and I’m thankful that I went from a Camaro to a 3-cylinder Mini Cooper a couple of years ago. That said, my 1977 Chevrolet C10 and its estimated 8 mpg will not leave the garage for quite some time.

I tend to ignore gas mileage until after I notice prices at the pump have jumped up considerably, but some car manufacturers have the foresight to produce cars good at the pump.

A 1970s import with stout gas mileage, the Pick of the Day is a 1978 Honda Civic offered by a dealership in Kentwood, Michigan, advertising on ClassicCars.com.  (click on the link to view the advertisement)

“With gas mileage averaging about 31mpg these were a smart choice and still are today,” the dealer states in the advertisement. “One family owned vehicle to market since being sold new out of Fisher Motors in Minot, North Dakota.”

It’s powered by a 1.2-liter inline-4 engine paired with a floor shifted 2-speed automatic transmission. It produced a factory-rated 62 horsepower and this isn’t a sporty compact by any means. The dealer states that the Civic has less than 29,000 original miles

“Mileage was documented and the previous owner was very adamant that the 28k miles is accurate and proper,” the dealer states in the advertisement. “Looking over the car and the receipts, registrations and paperwork we also believe the mileage to be correct.”

Finished in white with blue vinyl front bucket seats and a rear bench seat this Honda has seating for four, but as 5′ 8″ wiry guy that has rode in a Civic from the same era, use the backseat for luggage or groceries. It rides on 12-inch steel wheels with Honda center caps.

This Civic is available for $13,900 and dealer advises that this vehicle is titled as a 1977, but is registered as a 1978 due to the North Dakota basing the title on production date.

Three little words: The next thing in automotive GPS?