Chevy turned a cop car into a hot performance car 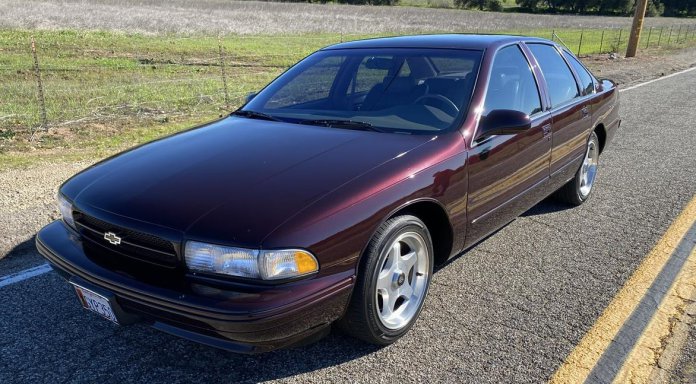 Debuting in 1994, the Chevrolet Impala SS was a cop car turned into a muscle car. To differentiate it from the Chevy Caprice on which it was based, the Impala SS featured an upgraded sport-tuned suspension, 4-wheel disc brakes, dual exhaust and a transmission cooler.

The Impala SS was powered by an LT1 350ci small-block V8 engine that produced a factory-rated 260 horsepower and 330 pound-feet of torque.

The 1994 Corvette and Camaro SS were powered by LT1 engines with aluminum heads, but the Impala’s featured cast-iron heads and a different camshaft designed for more lower-end torque. A 4L60E 4-speed automatic transmission sent power to the rear wheels with a 3.08 gear ratio.

The Pick of the Day is a low-mileage 1996 Chevrolet Impala SS finished in Deep Cherry Metallic over a gray interior with front leather bucket seats and an AM/FM stereo with a CD player.

“Original owner Southern California since purchased on 12.07.1995 from Courtesy Chevrolet in Thousand Oaks, California,” according to the Ojai, California, dealer advertising the Impala SS on ClassicCars.com. “Original verified 26,120 miles on the car since new.”

This example is largely original, aside from the aftermarket Hooker headers, and has been driven an average of 1,004 miles a year. It’s California emissions approved with California state AIR board documentation, and the current smog certificate is included if the car is titled in California after the sale.

To view this vehicle on ClassicCars.com, see Pick of the Day

My Classic Car: Teenage dreams of a 1959 Chevrolet Impala