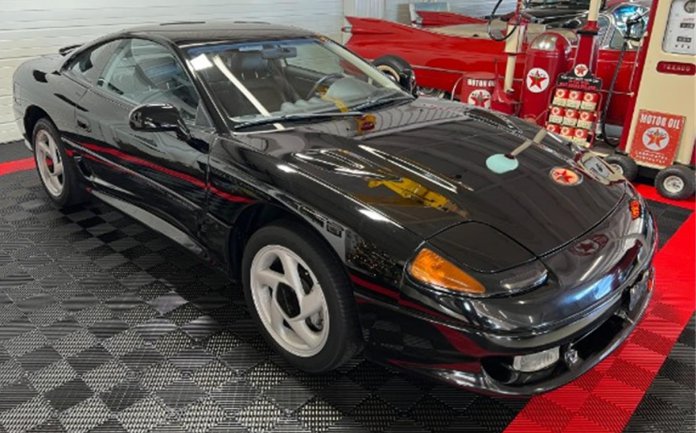 Sports cars of the 1990s are a branch of the collector car market gaining popularity as demand for Toyota Supras, Nissan 300ZXs and Skylines increase. A younger generation of car lovers had them as posters on their wall and have been influenced by the Fast & Furious movies.

The Mitsubishi 3000GT is part of the rising 1990s sports car market, but its sibling from America is often forgotten.

The Dodge Stealth and the Mitsubishi 3000GT are family. They have the same engine and drivetrains but with slightly different exterior appointments. The Pick of the Day is a 1991 Dodge Stealth R/T Turbo with 39,486 miles, listed for sale on ClassicCars.com by a dealer in Columbus, Ohio.

Due to a Mitsubishi and Chrysler partnership, known as Diamond-Star Motors, each could sell a rebadged car to different markets as a work around from tariffs and import quotas. From the partnership, we got the Dodge Stealth in the USA, which shares its underpinnings with the Mitsubishi 3000GT, but the Mopar is aesthetically different. Another Diamond Star example is the Mitsubishi Starion and the Chrysler Conquest.

Under the hood of this Stealth R/T is a twin-turbocharged 3.0-liter V6 6G72 engine that produced a factory-rated 300 horsepower and 307 pound-feet of torque. With a 5-speed manual transmission and all-wheel drive, the Stealth could go from 0 to 60 mph in 5.2-seconds and do the quarter mile in 14.0-seconds.

The Stealth is a more affordable option for modern classics with such solid street performance.

This Stealth R/T Turbo is finished in black with a rear spoiler, quad exhaust tips and rides on 17-inch alloy wheels. Visually different than the 3000GT in many respects, although both cars share a similar profile and could easily be misidentified.

“The interior is outfitted in gray leather with a matching dashboard and door panels,” the dealer notes in the listing. “Accessories include automatic climate control, a CD/cassette stereo with an equalizer. Auxiliary gauges are positioned at the center of the dashboard for monitoring boost pressure, oil pressure and coolant temperature.”

The asking price is $22,995. To view this Mopar on ClassicCars.com, see Pick of the Day.