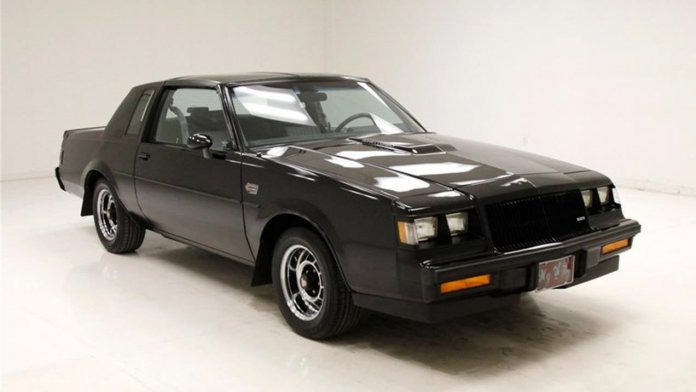 The 1980s was not the best era for General Motors performance.  A 1987 Chevrolet Corvette with a factory-rated 240 horsepower 5.7-liter V8 would take 15.11 seconds to run a quarter mile, but there was a Buick coupe with room for four that would smoke America’s sports car. The Pick of the Day is a 1987 Buick Grand National with 2,955 original miles listed for sale on ClassicCars.com by a dealership in Morgantown, Pennsylvania.

Under the hood is a turbocharged 3.8-liter V6 LC2 engine that produced a factory-rated 245 horsepower, paired with a 200R4 4-speed automatic transmission and 10-bolt 3.42 posi rear end.

This Buick is finished in code WA848 black and features T-tops, a rear spoiler and 15-inch honeycomb-style wheels with Grand National center caps. The comparison to an automotive Darth Vader is fairly apt.

“A quintessential mid ‘80’s square and rectangle dash is housing essential gauges and is very clean,” the seller notes in the listing. “Gazing up, we see a tight gray cloth headliner in the rear and over the front passengers nothing, but sky is seen through the crystal-clear tinted-glass tops,”

This Buick Grand National is being offered for $85,000.