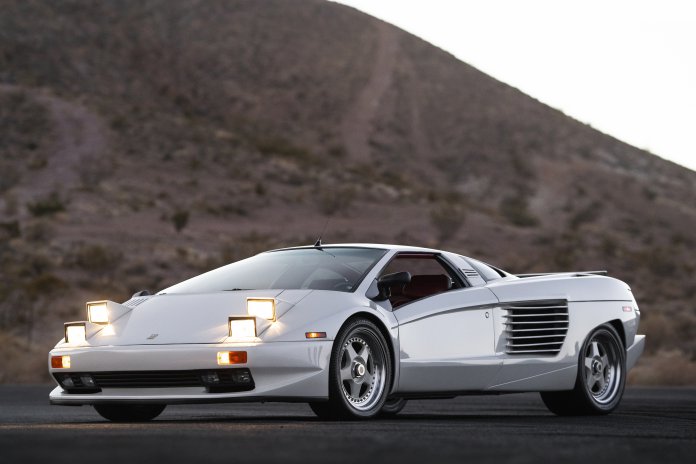 There are few opportunities to own a true one-of-one. But if you find the need to join an exclusive club head to RM Sotheby’s Arizona auction on January 27 and bid on a 1988 Cizeta-Moroder V16T, chassis 001.

The V16T was the brainchild of engineer and Lamborghini test driver Claudio Zampolli and his dream to build his own supercar. A chance encounter with “The Father of Disco” led to an unlikely partnership for the development of a supercar.

“The Father of Disco,” Giorgio Moroder, had a strong interest in sports cars and his discussions with Zampolli led to a partnership, with Moroder as an investor.

Moroder’s storied career as a songwriter, composer and producer garnered him three Academy Awards and four Grammys. He has collaborated with Donna Summer, Daft Punk, David Bowie and composed music scores for Scarface and Midnight Express.

Development began with a body by Marcelo Gandini, who designed the Lamborghini Miura, Lamborghini Countach and Alfa Romero Montreal, among others, during his iconic career. The V16T has more than a passing resemblance to the Lamborghini Diablo prototype that Gandini previously developed.

The collaboration ended after the production of the prototype, and chassis 001 is the only V16T badged as Cizeta-Moroder. Nine more V16Ts were produced, but under Cizeta. Chassis 001 was used as a show car at the 1989 Los Angeles and Geneva Motor Shows. Moroder has owned chassis 001 since new and he retained it after the car show circuit. After being kept in storage it was mechanically restored by Canepa Design in 2018.

The V16T introduced the world to a supercar powered by a transverse-mounted 6.0-liter V16, based on the Lamborghini DOHC flat-plane V8 engine, with a factory-rated 540 horsepower and 400 pound-feet of torque. The engine is paired with a ZF 5-speed manual gearbox. Performance was stout: 0 to 60 mph in 4.2-seconds and a top speed of 204 mph.

The car is finished in pearl white and chassis 001 has different exterior features than the remaining nine production V16Ts, including larger side intakes, and different turn signals, fog lamps and side mirrors. It features a red leather interior, but has different seats, dashboard, steering wheel, central tunnel, and door panels than the production vehicles.

The sale of this unique supercar includes a one-of-a-kind NFT by Moroder, Iconoclast, Jeremy Ian Thomas, a.k.a “Soulajit,” NFT Pro, and RM Sotheby’s. Within the NFT, a Giorgio Moroder 4-track music EP exclusive to the car is included. The NFT also includes a 3-D artistic rendering of the car in collaboration with “Soulajit,” as well as a 3-D scan of the car and digital documentation.